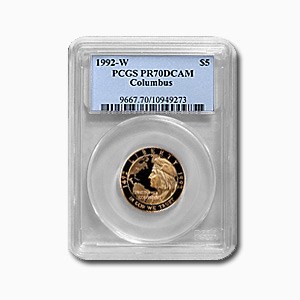 Population of just 356 coins!
This $5 Gold coin was issued to commemorate the quincentenary of Columbus’ discovery of America in 1492. This example is registry set quality, as it has been graded Proof 70 Deep Cameo by PCGS! The PCGS price guide values this coin at $550, so get this while you can!

The obverse features a portrait of Christopher Columbus in profile shown in front of a map of the New World. The reverse carries the crest of the Admiral of the Ocean Sea, a title given to Columbus by King Ferdinand and Queen Isabella of Spain, and a map of the Old World.