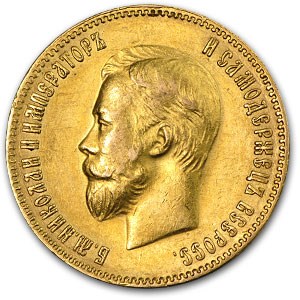 Imperial Russian Gold!
These 10 Rouble coins were struck during the reign of Nicholas II, the last Czar of the Russian empire. Each coin contains .2489 oz of pure Gold! Nice AU examples! Listed in Krause as Y#64.