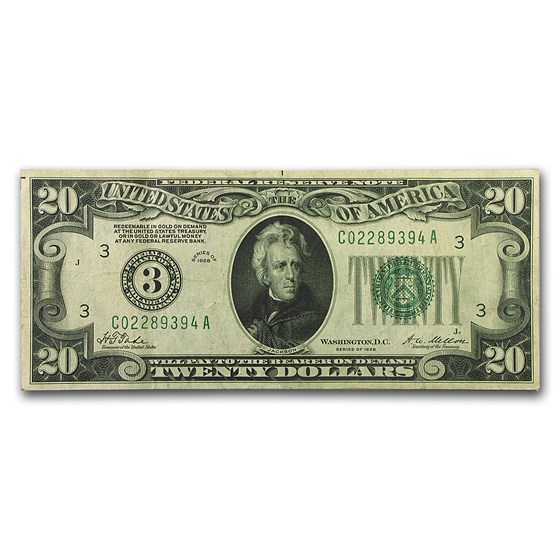 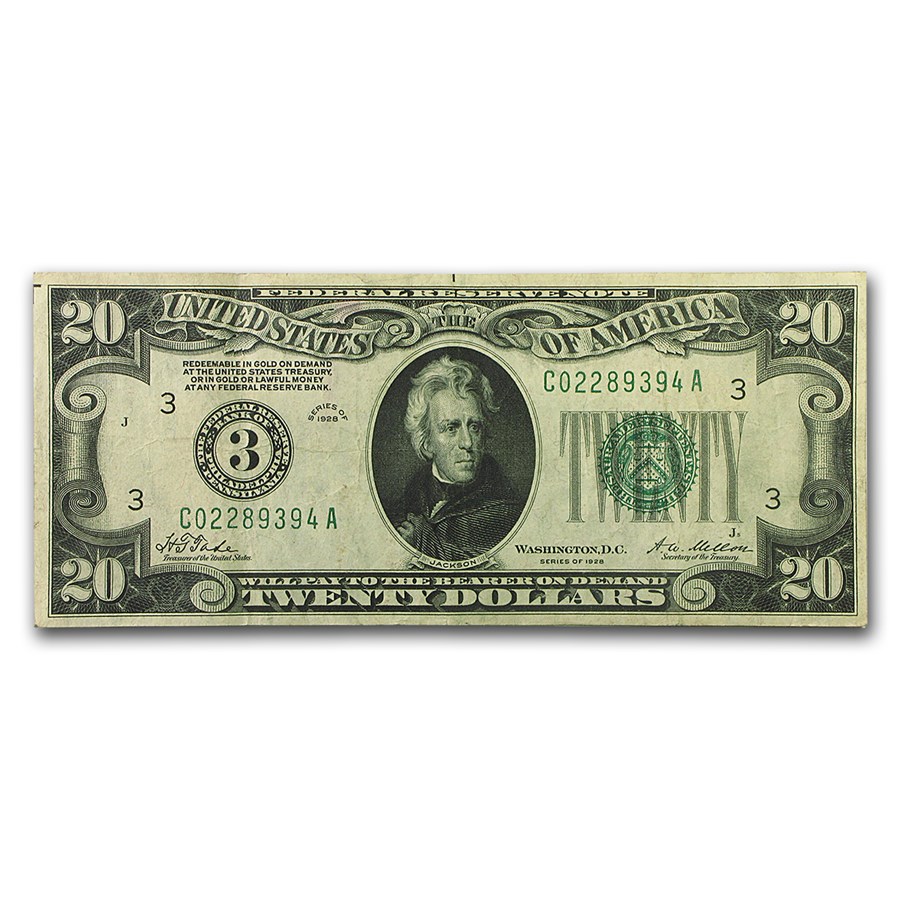 Product Details
Product Details
This Series 1928 $20 Federal Reserve Numeral Note is an affordable example that would fit well in any currency collection or type set!

This note also has the numeral '3' in the Federal Reserve seal prior to the adoption of the corresponding letter “C” which was adopted on the later series 1928-B.

These 1928 first small size Federal Reserve Numeral Notes can be elusive, and are in demand by collectors.

50% of reviewers recommend this product

Note received had three very pronounced areas of vertical folds and one pronounced horizontal area of folds. (similar to the note having been folded in half, half again and then over once more to form a square about 1" on each side. These were not just one time creases that were smoothed out, but multiple folding, plus signs of normal circulation wear throughout the paper. It was not as good as shown in the picture. The note did not have stains, ink marks, holes or tears. Paying for transportation both ways makes it uneconomical to request a replacement for the value of the note.

Many Folds for a VF

Item advertised as "lightly circulated". There are actually 4 grades that would fit into the VF category. These range from VF-20, 25, 30 and 35. The description did not indicate which grade would be sent. It was not advertised that this would be a certified specimen, and it was not. The note received was in a plastic sleeve marked by APMEX with a label indicating it was a VF. There was no further grading designation. Upon inspection, the note evidenced a long horizontal fold and folds three vertical folds. These were not merely creases that had been flattened out, but appeared to have been multiple folds in all vertical and the horizontal dimension. It appeared to have the type of wear one would expect of a bill that had been folded in half, and then half again, and then further folded over cross-ways leaving you with a square about 1" x 1". This might have sat in someone's wallet this way for years to account for the evidence of multiple folds across these dimensions. One corner of the bill had a crease. The reverse of the bill seemed slightly off color from what one might call normal circulation soiling while the front of the bill was more white in appearance. (Closer to the original paper color.) When held to the light, the multiple creases alone each vertical fold were more in evidence with some discoloration in those areas. The rest of the bill had evidence of other wear such as counting crinkles. When carefully removed from the protective plastic sleeve, there was some sound of the original crispness of the paper when flexed gently as collectors do when inspecting a bill. It was not limp. In other important respects, the bill otherwise met expectations. There were no tears, no pinholes or staples, no stains or ink marks. When you buy raw coins or currency (not certified by PCGS or NGC, you are placing utmost trust in the dealer from whom you buy, plus you want to be knowledgeable on grading standards. Ideally, you want to go with a dealer known for conservative grading, as otherwise you may find the mark-up to be too high to justify the purchase. If you are paying shipping charges to receive the item and then shipping costs to return the item, if unsatisfactory, it could be hard to take the risk of buying in the first place, unless the item is much more expensive than this bill. Does it sound like I got a good deal? Fair deal?