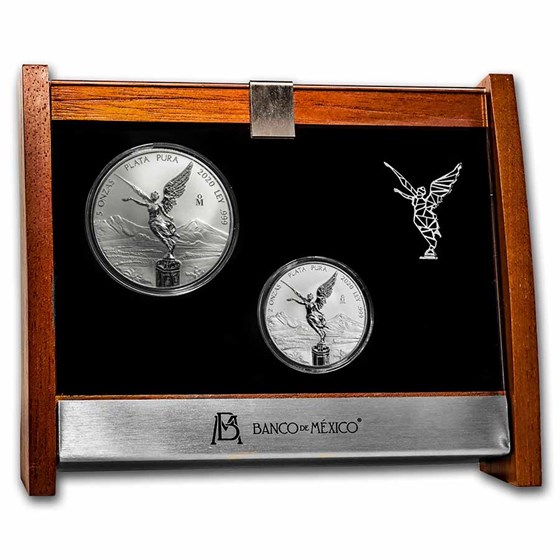 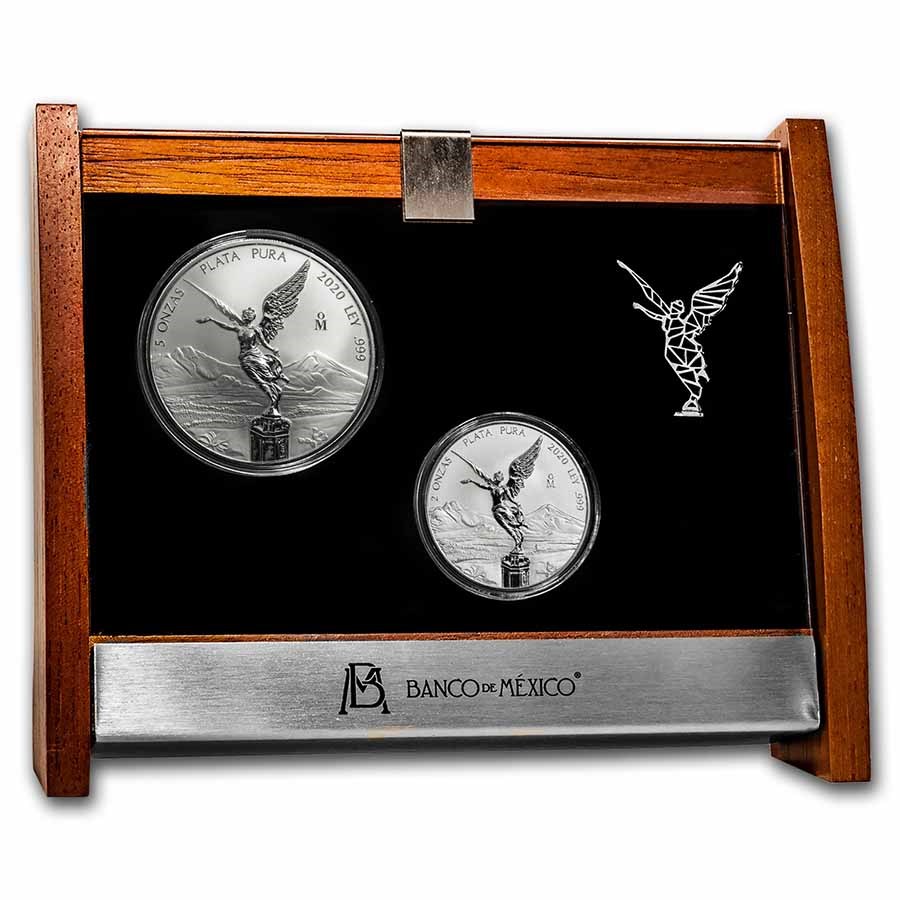 Your purchase is guaranteed to match the quality of the product shown. It will not be this exact item.
Product Details
Product Details
This Two-Coin Reverse Proof Set featuring the 2 oz and 5 oz Reverse Proof Libertads has only 250 sets available worldwide, and is the third year of issue for this exquisite set. It also includes a statue of the Winged Victory for added collectibility.

This beautiful set contains two 2020 Silver Mexican Libertad coins in Reverse Proof finishes, along with a statue of the Winged Victory. The Reverse Proof finish accentuates the coin's already impressive design, presenting Mexico's iconic volcanoes Popocatépetl and Iztaccíhuatl and a myriad of historic Coats of Arms in a highly-polished sculptural relief. The 2 ounce and 5 ounce coins also show the beauty of the Libertad coin in larger detail compared to its 1 oz counterpart. These two coins are housed in a wooden display featuring the Banco de México logo, and are accompanied by a numbered certificate of authenticity.

Due to limited quantities and high demand, there is a limit of 5 per customer.

These 250 limited sets each come with a special miniature statue and a wooden display. This gorgeous 2 oz and 5 oz Reverse Proof Silver Libertad set is a popular choice not only because of its attractive design, but also its mintage at Casa de Moneda de México, the oldest mint in North America. Add this 2020 2 oz and 5 oz Reverse Proof Silver Mexican Libertad Set to your cart today!

Silver Libertads
The Silver Libertad series is a classic series from Banco de México, produced annually. In 2017, the first Reverse Proof 2 oz and 5 oz Silver Libertads were produced, followed by a two-coin set in 2018. The set includes one each of the 2 oz Silver Libertad and 5 oz Silver Libertad, in Reverse Proof finishes, and is accompanied by a box, a certificate of authenticity, and a small statue of the Winged Victory. The Winged Victory, also known as the Angel of Independence, or the Angel for short plays a large part in Mexico's history. Originally finished in 1910, the statue of the Angel in Mexico City was built to commemorate Mexico's independence from Spain. The Angel is a version of the Roman goddess of victory, Victoria. The crown of laurel is for placing on the heads of victorious independence revolutionaries, and the broken three-link chain in the other hand represents three centuries of Spanish rule before Mexicans broke from Spain. The Winged Victory is a vital symbol of Mexico, and only fitting she be featured on the well-known Libertad coin series.