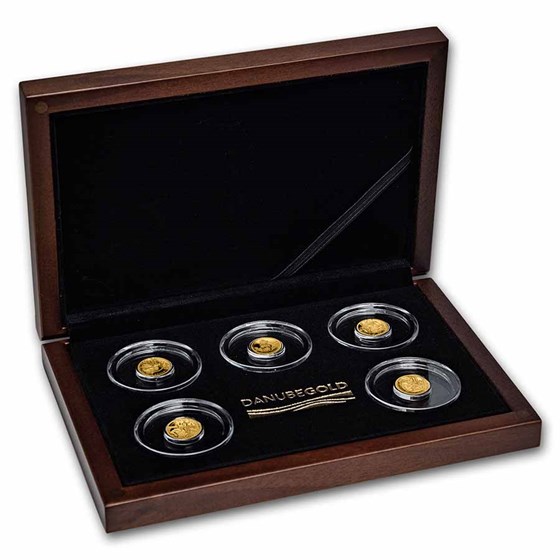 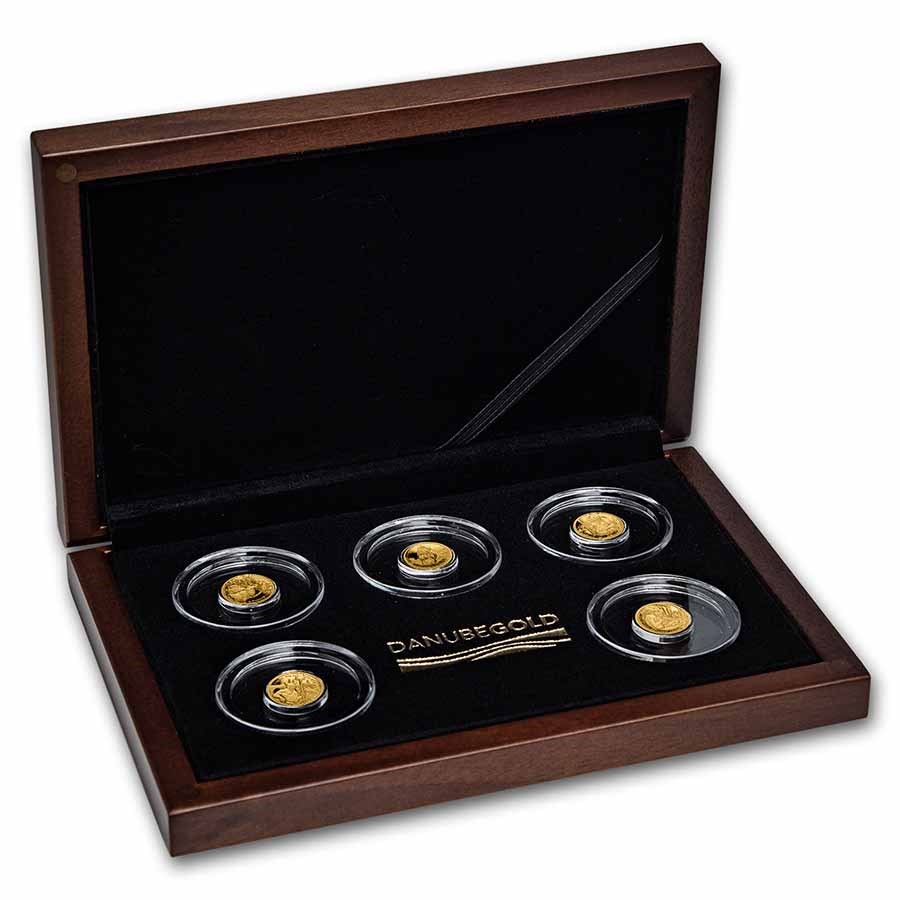 Your purchase is guaranteed to match the quality of the product shown. It will not be this exact item.
Product Details
Product Details
This 5-Gold Gold set pays tribute to the legends along the Danube. The mintage of this set is only 568.

Add this mythical Legends Along the Danube Set to your cart today!


Legends of Danube
The Danube is Europe's second longest river. For hundreds of years, people have reportedly found gold in the river, but it's very rare nowadays. The set is made from gold from the Danube and was combined with fine gold to create this extraordinary set.

The Ghost of the Heap in Bruggen

One night, the Ghost of the Heap in Bruggen, who was a mischievous goblin, met a poor farmer and asked him to fill his bag with leaves. Once he came home, the leaves have turned into gold pieces, and the poor farmer and his family seem to have overcome all of their problems. A voracious and jealous scrooge wanted to do the same thing, but the Ghost penalized the guy. The only thing he found in his bag was rotten wood.

Legend has it that Ruchtraut was so devotional that she crossed the dark forest every night, in order to visit the morning service in the church of Mistelbrunn. She was always accompanied by a deer on whose head 17 candles were burning. After Ruchtraut passed away, two bulls pulled the wagon with her casket, only led by the Lord’s will, through the forest to the church of Mistelbrunn where the devotional woman found her eternal peace.

The Prince of the Danube

It should read that the crystal palace of the ferocious Prince of the Danube stands on the ground of the river. Whomever he could grab with his hands was torn into the deep. This also happened to the daughter of an old fisherman. To take vengeance, the bereaved fisherman took an antlered paddle and tried to beat the Prince. He damaged his crown, which meant that he was prohibited to enter the crystal palace again. Legend has it that he’s wandering alongside the shores of the river ever since.

One night, a fisherman on the Danube was overtaken by an upcoming storm. But while the river was foaming fiercly, the heaven was starlit. All of a sudden, the dark silhouettes of four mighty ships with riven sails appeared. A dazzling flash cut through heaven and the fisherman passed out. As he regained consciousness, everything was quiet and the Danube flowed smothly again – just like the four ships were only ghosts.

One of the most important landmarks of Regensburg is The Stony Bridge, which was built from 1135. Legend has it that in order to speed up its completion, the master builder made a deal with the devil. He promised him the first three souls which would cross the bridge. At its opening, the builder send a rooster, a chicken and a dog over the bridge and cheated the devil.

Solomon Islands
The country of issue, Solomon Islands is comprised of six major islands and is located in Oceania, east of Papua New Guinea. Honiara is the capital with approximately 70,000 people. The population is approximately 555,000 and is predominantly Melanesian. Their local customs and traditions is still an important part of their life.