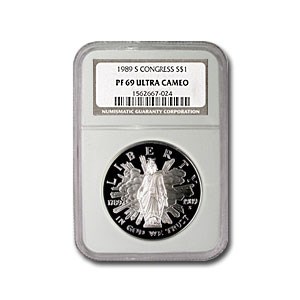 This Silver coin was one of three coins released to celebrate the 200th anniversary of the U.S. Congress. The legislative body first convened under the U.S. Constitution in 1789 in Philadelphia. The other two commemorative coins were a clad half dollar and a $5 Gold coin.

The obverse features a full view of the Statue of Freedom, which was placed atop the Capitol dome in 1863. Clouds and rays of sunlight appear in the background. The reverse shows the mace of the House of Representatives with a close up view of the eagle perched on the globe. This example is spotty or cloudy, but has still been graded Proof 69 Ultra Cameo by NGC!