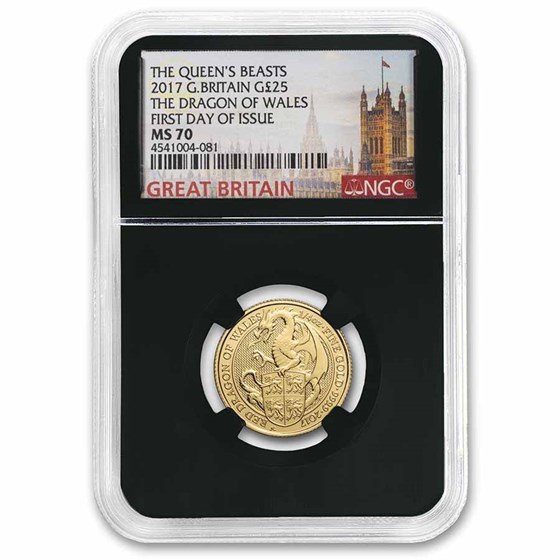 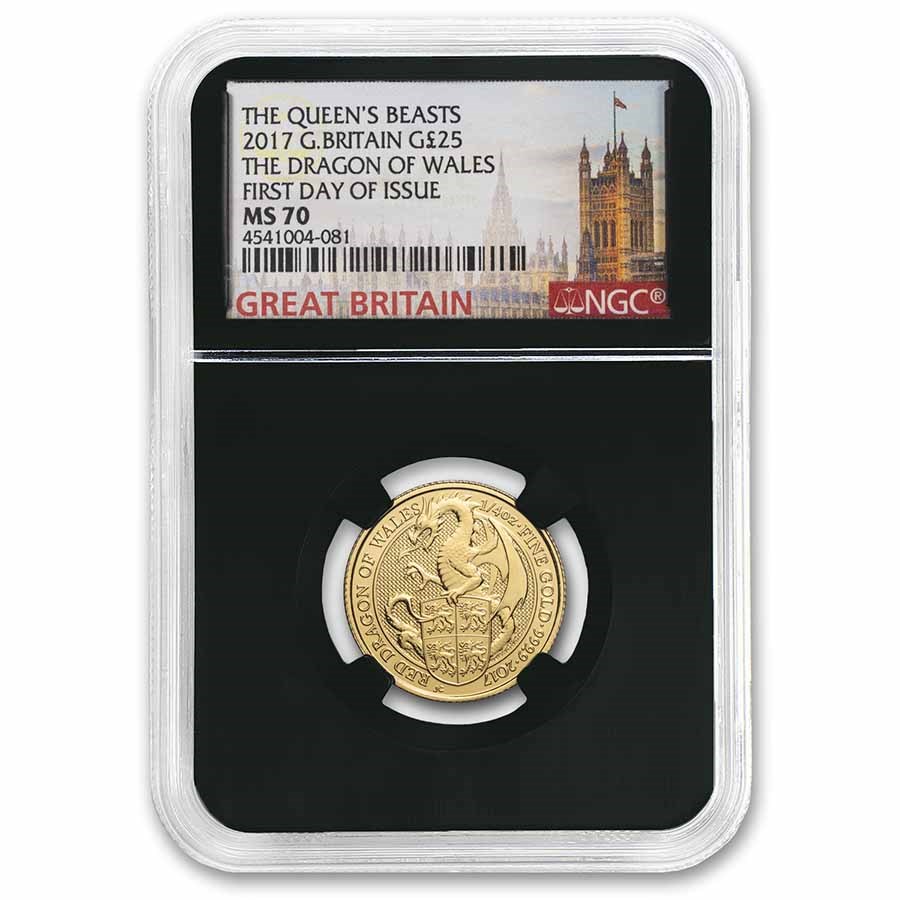 Product Details
Product Details
Intricate details add a sense of power to the Red Dragon of Wales, the third release in the popular Queen's Beasts series. This coin is graded a perfect Mint State 70 by NGC, with a First Day designation.

Coin Highlights:
Display your 1/4 oz Gold Queen's Beasts: The Dragon in style by adding an attractive display box to your order.

Add this MS-70 Queen's Beast coin to your cart today!

The Queen’s Beasts Collection
At the coronation of Her Majesty The Queen, 10 heraldic beasts stood guard. The Queen’s Beasts, sculpted by James Woodford RA for the coronation ceremony held in Westminster Abbey in 1953, stand six feet tall. The heraldic creatures symbolized the various strands of royal ancestry brought together in a young woman about to be crowned queen. Each proud beast, used as a heraldic badge by generations that went before her, was inspired by the King’s Beasts of Henry VIII that still line the bridge over the moat at his Hampton Court Palace.

Today, The Queen’s Beasts can be found at the Canadian Museum of History in Quebec, while Portland stone replicas, also carved by James Woodford, watch over Kew Gardens in the United Kingdom. These mythical, ancient creatures such as the lion, griffin, falcon, bull, yale, greyhound, dragon, unicorn and horse have gone on to inspire the highly-praised new talent, Royal Mint Coin Designer Jody Clark.

The Celtic dragon represents sovereignty and power. The Welsh dragon was used in the Royal Arms in the 16th century and the red dragon of Cadwallader is the emblem on the national flag of Wales. The red dragon gained popularity due to its supposed link of being the battle standard of King Arthur and other ancient Celtic leaders. Its association with these leaders along with other evidence from archeology, literature and documentary history led many to suppose that it evolved from an earlier Romano-British national symbol. During the reigns of the Tudor monarchs, the red dragon was used as a supporter in the English rrown's coat of arms.