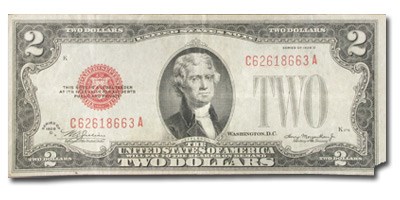 Product Details
Product Details
These Series of 1928-D $2.00 United States Notes, more commonly referred to as Legal Tender or Red Seals, feature bold colors. Notes in this listing will have missing corners, but otherwise are still nice and priced accordingly.

United States Notes were adopted for circulation during the Civil War in 1862 in denominations from One through One Thousand Dollars. The $2.00 denomination remained when we converted to small size notes in 1928 and continued until the early 1960s when the denomination was discontinued. The deuce was revived in 1976 as a Federal Reserve Note.
Many $2.00 bills have a corner missing. Do you know why? $2.00 bills were considered bad luck and tearing off a corner was thought to release any bad luck!