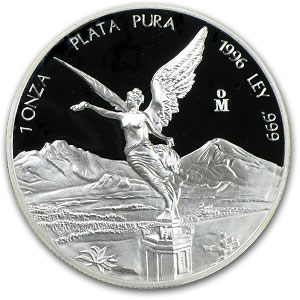 Mintage of only 2,000
Each beautiful Silver proof coin comes to you from the Banco De Mexico. The obverse bears a lovely depiction of the Independence Angel gracefully reaching toward the heavens on a volcanic landscape. The two volcanoes pictured are Popocatepetl and Iztaccihuatl, named after the legend of the doomed lovers. There are many versions of this tale, here is the most popular:
Princess Iztaccíhuatl's disapproving father sent her lover, Popocatepetl, to war in Oaxaca and promised him the princess as his wife if he returned (which Iztaccíhuatl's father hoped and presumed he would not). Iztaccíhuatl's father then falsely informed her that her lover had fallen in battle, causing her to die of grief. When Popocatépetl returned victorious, he discovered the death of his lover. Heartbroken, he carried her body to the top of a hill and committed suicide by plunging a dagger through his own heart. God was said to have covered them in snow and changed them into volcanic mountains. Iztaccíhuatl's mountain was called "La Mujer Dormida, (the "Sleeping Woman"), because it bears a resemblance to a woman sleeping on her back. Popocatépetl became the volcano Popocatépetl, raining fire on Earth in blind rage at the loss of his beloved.