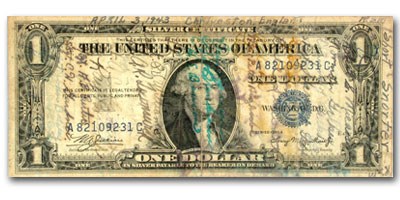 Product Details
Product Details
1935-A $1.00 Silver Certificate in Very Good/ Very Fine condition. Short Snorter is a bank note, which circulated during World War II and the Korean War upon which individuals who traveled together or met at different events would sign and collect.

This is an amazing Short Snorter from World War II.


A Short Snorter is a bank note, typically Silver Certificate, which circulated during World War II and the Korean War upon which individuals who traveled together or met at different events would sign. The notes could be taped end to end to increase the status of the bearer.

They were popularized by air crews during World War II. Snort was the slang term for an alcoholic beverage and a short one was less than a full pour. Additionally, members of the military who had flown across the Equator or from country to country came to be known as a "short snorter" Airmen at the bar would be asked if they were a short snorter and the one with the shortest snorter picked up the tab.

Some notes have a date of April 3, 1943 Chelveston, England (where the 305th Bombardment Group (Heavy) moved to in December 1942). One of the most decorated United States Army Air Force bomb groups in the European Theater, the 305th Bomb Group would later recive the Distinguished Unit Citation for a mission the following day April 4th, 1943 to Paris, France. This short snorter is a snapshot of an event; present during the pre-mission festivities of an historical mission, this is the closest you can get to being a fly on the wall.

Some of the signatures on historic Short Snorts include that of: Tech. Sgt. Peter Highcove who reported in the November 20th, 1943 issue of the Ukrainian Weekly was a Decorated Flyer in 25 Nazi Forays; S/Sgt. C. H. Gardner, Robert S. Miears, Norman Gillsey, William F. Clendersen, Capt. P.V. Williams, along with many others. On the top of the back is "Trans-Atlantic October 25, 1942" This is a great note!