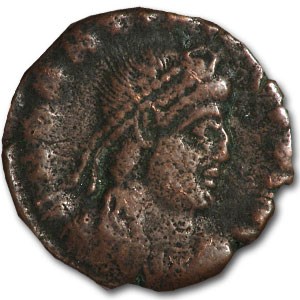 Valens the younger brother of Valentinian I was raised to the rank of Augustus in 364 AD. Given the government of the Eastern provinces much of his reign was spent campaigning against the Goths on the Danube frontier and the Persians in the East. In 378 AD, near Hadrianopolis, a great battle against the Visigoths was fought. The Roman army was almost amnihilated and the Emperor was slain.

This comes with a brief history and a certificate of authenticy. Grade Fine. Sear 4117