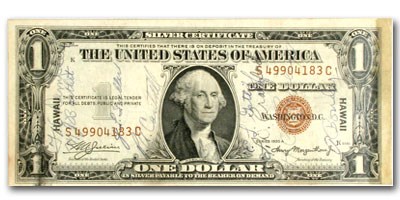 This is an amazing Short Snorter from World War II.

A Short Snorter is a bank note, typically Silver Certificate, in this case a Hawaii overstamped World War II Emergency Bank Note which circulated during World War II upon which individuals who travelled together or met at different events would sign. The notes could be taped end to end to increase the status of the bearer.

They were popularized by air crews during World War II. Snort was the slang term for an alcoholic beverage and a short one was less than a full pour. Additionally, members of the military who had flown across the Equator or from country to country came to be known as a "short snorter" Airmen at the bar would be asked if they were a short snorter and the one with the shortest snorter picked up the tab.

This note has eight signatures which include that of: F.H. Dempsey, M.J. Barthet, J.L. Fuller, R.A. Cantrell, E.L. Gatliff, L.D. Crawford, (undetermined), and A> Bondy. This is a great Hawaii note in itself, its short snorter status makes it that much better!