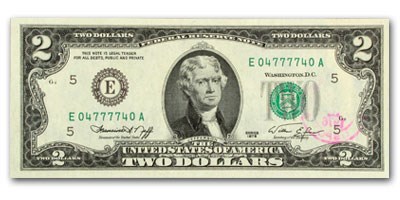 The United States Treasury Department released for circulation the 1976 $2.00 Federal Reserve Notes on April 13th, 1976 in commemoration of Thomas Jefferson's birthday and in conjunction with the bicentennial celebrations taking place throughout the United States. The United States Post Offices were authorized to hand cancel only the $2 bills with 13¢ stamps affixed. This is a very unique note due to it being both cancelled on the first day of issue and by being a Radar Note, where the serial number is the same forward and backward.