Money of the USA Colonies Set 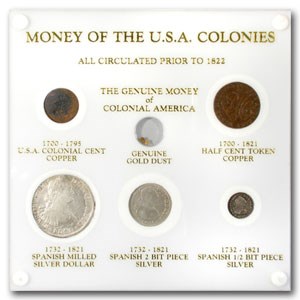 This independently packaged mint set contains coins representative of the types that were used in the early days of the colonies that became what is now the USA. Included in the Capitol Plastic holder is coinage from French areas of the colonies, condor tokens from the British areas, Gold dust, and Spanish Silver which formed the basis for circulation coinage of the colonies well into nationhood. Handsomely presented and including a short informational sheet. A nice set sure to provoke conversation.