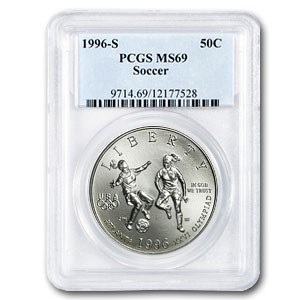 This commemorative Half Dollar was one of four commemorative half dollars issued for the Atlanta XXVI Olympiad Summer Games. The obverse depicts two women playing soccer. The reverse features the Olympic flame and logo surrounded by the inscriptions “United States of America,” “E Pluribus Unum” and “Atlanta 1996.”

This example has been graded Mint State 69 by PCGS!