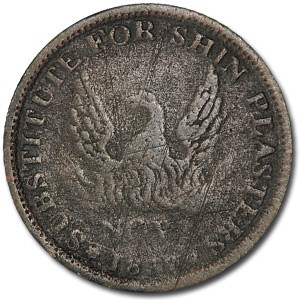 Obverse depicts the phoenix rising from flames (the flames being emblematic of the opinion that the only fit use for the paper money "shin plasters" of irresponsible banks and private parties was to be burned, and the rising phoenix being emblematic of the resumption of specie payments which was an on-again off-again proposition throughout the years.) This design is surrounded by the statement "Substitute for Shin Plasters" NOVr 1837.
Reverse states "MAY / TENTH / 1837" surrounded by wreath surrounded by SPECIE PAYMENTS SUSPENDED

On November 27th, 1837 representatives from the leading banks of nineteen states met in New York to determine a date for resumption of specie payments - the date eventually being set as May 10th, 1838.