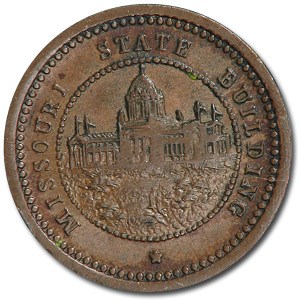 Obverse: Image of the Missouri State Building surrounded by the building name
Reverse: In Commemoration of the Universal Exposition St. Louis 1904 Grade: Uncirculated

The 1904 St. Louis World's Fair, also referred to as The Louisiana Purchase Exposition was held the year following the centennial of the Louisiana Purchase, running from April 30th, 1904 through December 1st, 1904. The song, "Meet Me in St. Louis, Louis" was inspired by the 1904 World's fair, and the waffle-style ice cream cone was invented and sold during the fair. Dr. Pepper was introduced to a national audience.