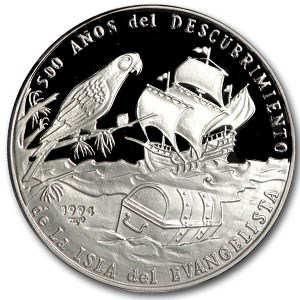 This coin commemorates the island presently known as Isla de la Juventud, the Isle of Youth. Columbus originally named this island La Evangelista. Both Robert Louis Stevenson, and James M. Barrie used this island and its history as source material for the book, Treasure Island, and the book, Peter Pan. This proof Silver depicts a pirate ship, a parrot, and a chest of treasure. Silver content is .6423 of an ounce. KM#441.