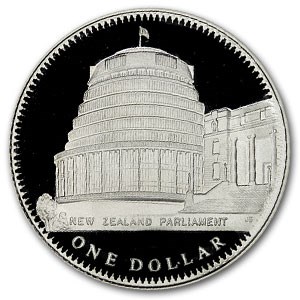 This Silver coin is a double commemorative. Silver content is .8094 of an ounce. Honored with an inscription on the obverse is the 25th anniversary of Queen Elizabeth II's coronation on the 2nd of June, 1953. Depicted on the reverse is the new New Zealand Parliament building, called by some the beehive. Only 33,000 were issued.