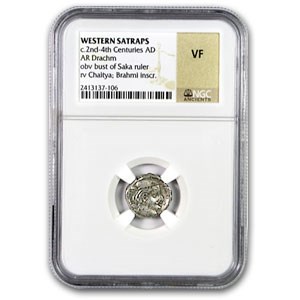 The Western Satraps, or Western Kahatrapas (35 - 405 AD) were Saka rulers of western and central India. They were successors to the Indo-Scythians and contempories of the Kushans who ruled the northern part of India.

The coinage is based on the earlier Indo-Greek Kings, with Greek or pseudo-Greek legend and life-like profiles of royal busts on the obverse. The reverse depicts a three arched hill and river symbol with a cresent and sun within a legend in Brahmi.

The coins are of very fine workmanship and approx. (14mm-1.9g).
Graded by NGC as Very Fine.