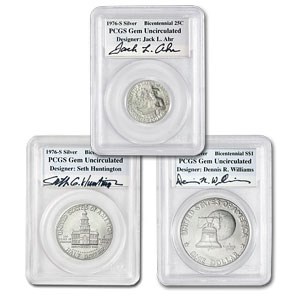 Capture the U.S. Bicentennial in all of its glory with a complete set of 1976 Proof Signed Bicentennial Coins. Each coin features a special reverse design in celebration of the 200th anniversary of American independence. The coins are dual dated, 1776-1976, the only coins ever dual dated by the U.S. Mint. The set includes a Bicentennial quarter - the first Washington quarter without the eagle reverse, a Kennedy half dollar with Independence Hall's image on the reverse - the only design change ever for that series and an Eisenhower dollar, featuring a low relief and bold lettering on the reverse. Each of the items is autographed by the coin designer - the quarter by Jack L. Ahr, the half dollar by Seth Huntington and the dollar by Dennis R. Williams. The name appear on the capsules provided by the PCGS to preserve the coins beauty and condition.