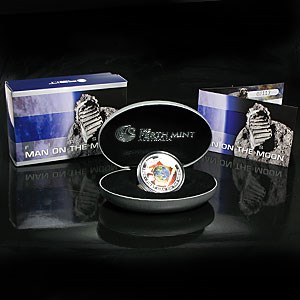 Mintage of only 25,000 coins!
Fourth release in the five-coin Orbit & Beyond Series.
This Silver coin features Apollo 11 during different phases of its historic mission and an astronaut’s footprint on the surface of the Moon. These elements, which appear on a colored representation of the Universe, together with the border inscription 1969 "FIRST MAN ON THE MOON", literally ‘orbit’ around a colored image of Earth. The Raphael Maklouf likeness of Her Majesty Queen Elizabeth II and the monetary denomination are shown on the obverse.
Each coin is housed in an elliptical-shaped Silver display case also contains a numbered COA. The case comes in a blue box-shipper depicting a Shuttle blast-off.
By launching the space probe Luna 3 on October 4, 1959 the Soviet Union initiated a new step for the footrace to the moon. With a small camera the space probe succeeded to take first photos of the earths averted side of the moon which no human being has ever seen before - "dark side of the moon". The pictures were of poor quality; however the highlands and lowlands were clearly recognizable. The big dark "Mare Moscoviense" is, among others, also visible.
However 10 years later the Americans succeeded to win the footrace. On July 21, 1969 at 3.56 o'clock CET, Neil Armstrong left the lunar module Apollo 11 and set foot on our next orb with the words "That's one small step for man, one giant leap for mankind!"
In memory of this double anniversary this extraordinary Silver coin has been issued.