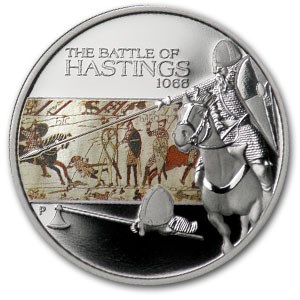 Mintage of only 5,000 coins!
This Silver coin is the third release in a five-coin series.
This Battle of Hastings coin features a colorized image as it was recorded in the historic Bayeaux Tapestry. Struck elements of the Proof Silver release’s reverse portray a Norman knight, a Norman helmet and a Saxon long-handled axe. The Raphael Maklouf likeness of Her Majesty Queen Elizabeth II and the monetary denomination are shown on the obverse. Each coin is housed in a presentation display case and superbly illustrated shipper and comes with a numbered CoA.

The Battle of Hastings marked a pivotal moment in English history. In 1066, William Duke of Normandy’s fleet landed near Hastings where it engaged King Harold’s foot-weary army, recently returned from conflict in the north. A fierce battle raged for much of the day until the persistence of William’s soldiers eventually succeeded in breaking through the English lines. During the mêlée, Harold was struck in the eye by a Norman arrow, a fatal blow depicted in the 11th century Bayeaux Tapestry.
Shop APMEX's wide selection of Perth Mint Silver coins. APMEX makes it easy to buy Silver by offering competitive Silver prices on all Silver products.

I love this coin, and this is like the ultimate hill battle. The tapestry looks just like the real one hanging in England? Medieval times must of been awesome. I have wondered if these are the days of Robin Hood.