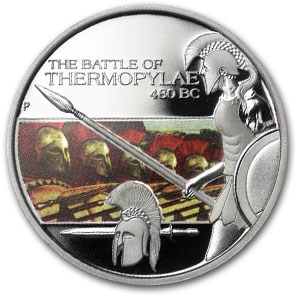 Mintage of only 5,000 coins!
This Silver coin is the first release in a five-coin series. This Battle of Thermopylae coin features a colorized image of Spartan warriors in classic phalanx formation. Struck elements of the design depict a Spartan warrior wearing a protective Corinthian helmet and metal cuirass, or breastplate, wielding a sword. The Raphael Maklouf likeness of Her Majesty Queen Elizabeth II and the monetary denomination are shown on the obverse. Each coin is housed in a presentation display case and superbly illustrated shipper and comes with a numbered CoA.

The Battle of Thermopylae was fought during the second Persian invasion of Greece. In this three-day battle, a huge Persian army amassed by Xerxes conquered the Greeks. The Greeks held off the Persians for seven days in what is now remembered as one of history's most famous last stands.