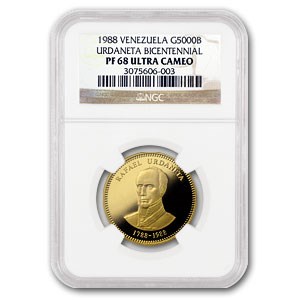 This coin was issued by Venezuela to comemmorate the bi-centennial of the birth of Rafael Urdaneta.
Rafael José Urdaneta y Faría (Maracaibo, Venezuela, October 24, 1788 – Paris, France, August 23, 1845) is a hero of the Spanish American wars of independence in several countries in northern South America. He is revered in South America, and is probably second in popularity only to Simon Bolivar. Actual Gold content is .450 of an ounce. The Venezuelan coat of arms appears on one side, while a left oblique facing bust of Urdaneta appears on the other. Graded Proof 68 Ultra Cameo by NGC!