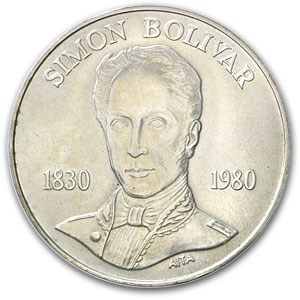 Issued to commemorate the 150th anniversary of the death of Simon Bolivar. A monument to the great leader of South American independence appears on the obverse, while a facing figure of Bolivar dividing the date appears on the reverse. This Silver proof contains .6367 of an ounce of Silver. Cataloged as Y# 56.