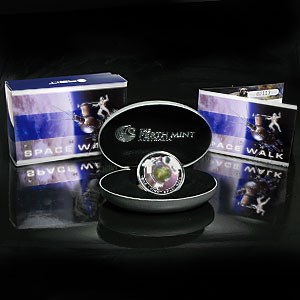 Mintage of only 25,000 coins!
Third release in the five-coin Orbit & Beyond Series.
This Silver coin features a space walking Leonov outside Voskhod II in orbit around a colorful earth. The Raphael Maklouf likeness of Her Majesty Queen Elizabeth II and the monetary denomination are shown on the obverse.
Each coin is housed in an elliptical-shaped Silver display case also contains a numbered CoA. The case comes in a blue box-shipper depicting a Shuttle blast-off.
Exiting the Voskhod II capsule 500km above Earth, Leonov floated in space for more than 10 minutes before attempting to re-enter the airlock. Alarmingly, his space suit had inflated, forcing the courageous cosmonaut to vent air before being able to squeeze back inside to rejoin compatriot Pavel Belyayev.