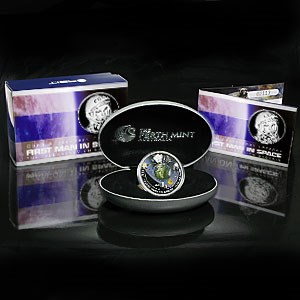 Mintage of only 25,000 coins!
Second release in the five-coin Orbit & Beyond Series.
This Silver coin features a colorful outer reverse or tails design bearing a "montage of images" symbolizing Gagarin’s journey and the border inscriptions "1961 FIRST MAN IN SPACE – YURI GAGARIN." The Raphael Maklouf likeness of Her Majesty Queen Elizabeth II and the monetary denomination are shown on the obverse.
Each coin is housed in an elliptical-shaped Silver display case also contains a numbered CoA. The case comes in a blue box-shipper depicting a Shuttle blast-off.
This coin celebrates the journey of Yuri Gagarin, who became the first person to enter space and orbit Earth for 1 hour 48 minutes aboard Vostok 1 on April 12, 1961. Yuri Gagarin flew only one space mission. His orbit around earth reach a speed of 27,400 kilometers per hour and an altitude of 327 kilometers. Gagarin died on March 27, 1968 while flying a MiG-15 outside of Moscow. At the request of his wife, American astronauts Neil Armstrong and Edwin Aldrin left one of Gagarin’s medals on the moon as a tribute to the world’s first man in space.