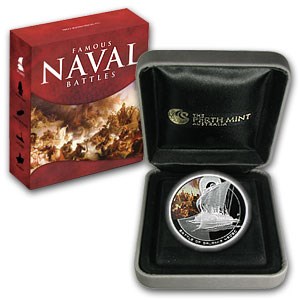 Mintage of only 5,000 coins!
This Silver coin is the first in a five-coin series. The 2010 Proof Silver Battle of Salamis coin features a trireme, a fast and agile warship used by ancient civilizations of the Mediterranean between the 7th and 4th centuries B.C. This Silver coin also features a colored section depicting a battle scene. The Raphael Maklouf likeness of Her Majesty Queen Elizabeth II and the monetary denomination are shown on the obverse. Each coin is housed in a presentation display case and superbly illustrated shipper along with a numbered CoA.

The Battle of Salamis was a pivotal encounter of Greco-Persian Wars in the 5th century B.C., and it resulted in an improbable victory for the vastly outnumbered ships of the Greek alliance. Greek commander Themistocles devised a brilliant strategy that lured the large Persian fleet into the narrow strait between the island of Salamis and the Athenian port-city of Piraeus. Here the Greek triremes attacked furiously, ramming and boarding the tightly-packed formation of Persian ships which had difficulty turning in the restricted channel. Estimates put Greek losses as low as 40 ships out of a total of 380. The much larger Persian fleet suffered greatly, however, losing hundreds of ships during the battle. In the aftermath of Salamis, further decisive Greek victories at Plataea and Mycale effectively ended the invasion plans of Persia’s King Xerxes.