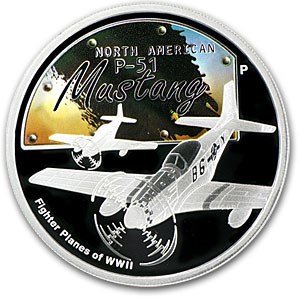 Mintage of only 3,500
Part of the Fighter Planes of WWII series.
This coin features two P-51 Mustang flying in battle. The Raphael Maklouf likeness of Her Majesty Queen Elizabeth II and the monetary denomination are shown on the obverse.
Box w/CoA.
In 1942, the North American Mustang was fitted with the superlative Merlin engine, creating the definitive long range fighter of WWII. With the protection of Mustang escorts, US bombers were able to resume their daylight missions deep inside Germany, ensuring Allied air supremacy prior to the invasion of Europe in 1944. Making a similarly notable contribution in the Pacific theatre, where it escorted B-29 raids, the Mustang's pivotal role during the latter half of the War persuaded many that it was one of the greates US fighters ever built.