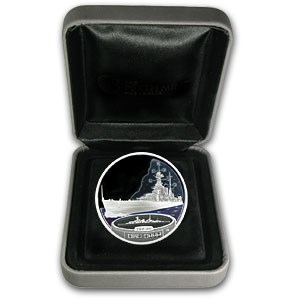 Historic WWII Battleship.
WWII officially began on September 3,1939 at 1100 hrs. The HMS Hood Vessel was ordered to depart Scapa Flow on October 8,1939 to intercept Gneisenau and 9 destroyers. On May 24,1941 The HMS Hood Sank in the battle of Denmark Strait. The vessel sank due to a large explosion believed to be resulting from a hit from the Bismarck.
Aboard the HMS Hood battleship were 1,418 crew members, only 3 men survived the explosion.Part of the Fighting Ships of WWII series. With box and CoA.