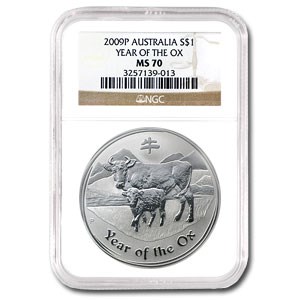 Graded MS-70 by NGC
This coin's reverse features an image of an ox and a calf standing on grass with hills in the background. As well as the inscription ‘Year of the Ox’ and the Chinese character for ‘ox’, the design also incorporates The Perth Mint’s ‘P’ mintmark. The Ian Rank-Broadley likeness of Her Majesty Queen Elizabeth II and the monetary denomination are shown on the obverse.
The 2009 Australian Lunar Silver Coin Series celebrates the Year of the Ox – an animal associated with determination, patience and dependability in Chinese culture. As well as appealing strongly to collectors, this colored release makes an ideal gift for all those born in the Year of the Ox - including 1925, 1937, 1949, 1961, 1973, 1985, 1997 and 2009.