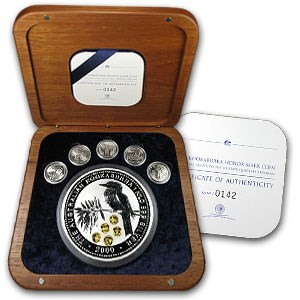 Mintage of only 1,000!
The 2000 Silver Kookaburra features a kookaburra sitting on a tree branch with leaves, designed by Mathew Gee. The Ian Rank-Broadley profile of Her Majesty Queen Elizabeth II and the monetary denomination are shown on the obverse. Comes with box and certificate of authenticity. From the certificate: The U.S. 50 State Quarters Program has become the most collected series of of coins issued in modern times. It features historic designs honoring all of the U.S. states in the order in which they joined the union. In recognition of this, the Perth Mint has issued a limited edition with no more than 1,000 sets minted, pure Silver kilo Kookaburra Honor Mark coin.

The 1 kilo Silver coin contains 32.15 troy oz of fine Silver featuring five pure Gold Honor Marks, each depicting the reverse design of one of the five U.S. State Quarters issued by the U.S. Mint in 2001, each of which is included in the set.