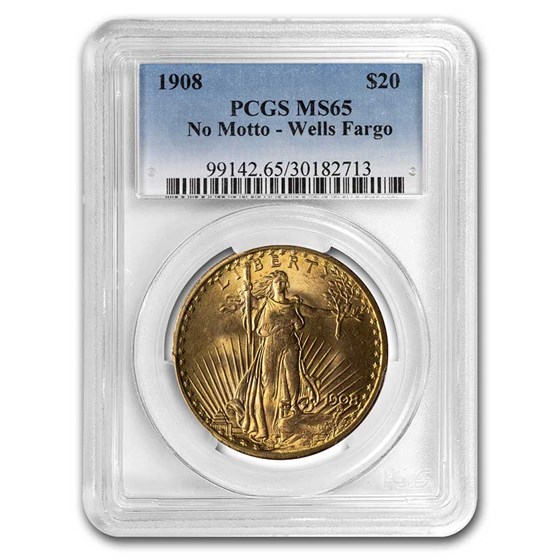 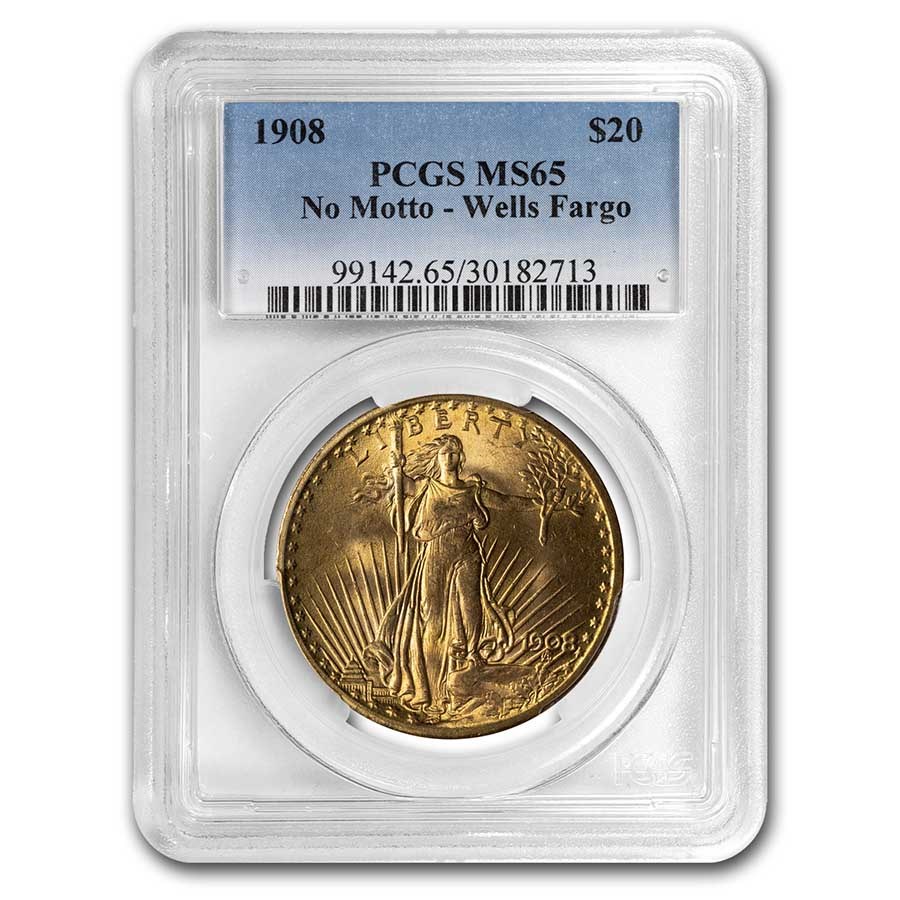 Product Details
Product Details
Only $3,295.00 per coin
As a general rule of thumb, all 1908 Wells Fargo pedigreed $20 Saints are extremely nice and eye appealing, this one is no exception.

Protect and display your 1908 $20 St. Gaudens Gold No Motto MS-65 PCGS (Wells Fargo) graded coin in style by adding an attractive display box to your order.

The Wells Fargo Nevada Gold hoard is an amazing collection of 1908 No Motto $20 Saint-Gaudens Gold coins. The hoard was purchased for more than $10 million and was the largest price paid for a collection of coins at the time by a very wide margin. In outstanding condition, over 95% are graded Mint State 65 or better.

A collector with foresight and the necessary means acquired this collection of $20 Saint-Gaudens Gold coins in 1917 and promptly hid them for safekeeping. There they remained undisturbed for more than 50 years. Hidden away from the public, these stunning coins survived several significant events that meant the end of many other Saint-Gaudens coins, including Gold confiscation via executive order in 1933.

In the early 1970s, the coins were taken out, sorted, inventoried, and resealed. They did not see the light of day again until their inspection and sale in 1996. Although the buyer is known, the seller is not: the buyer signed a strict confidentiality agreement guarding the privacy of the previous owners. Not until they met again was the true number known: over 15,000 $20 Saint-Gaudens Gold coins. The meeting took place at a Wells Fargo bank in an undisclosed city in Nevada. The coins were held in a large walk-in vault, which formerly served as a Federal Reserve Bank where Silver dollars were stored in the 1960s and 1970s.

The double eagles were rolled in paper tubes, placed in canvas bags, and stored in screw-top boxes in this vault. The coins were still surrounded by Gold dust when first inspected. While Wells Fargo does not claim to be the owner of these coins at any point in their history, their name is used for the pedigree. The name was selected because of where the coins were stored and the deal was negotiated.