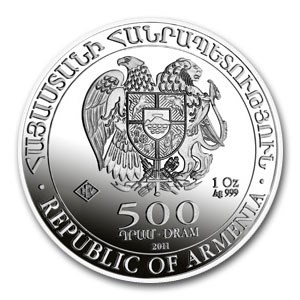 The first year of issue, these Armenian Noah's Ark Silver Coins embody the beauty of faith and conviction amongst adversity. Transcendent in spiritual and physical beauty, these coins capture this story of tribulation, promise, and of blessing embraced in 1 oz of .999 fine Silver. Each coin tells a story directly connected with Armenia where Noah's Ark is believed to have rested on Mt. Ararat after the flood waters receded.

Silver 1 oz Noah's Ark Coins are great for diversifying your portfolio at a low price, for collecting, and for presenting as a gift. Add this 2011 Armenia 1 oz Silver 500 Drams Noah's Ark coin to your cart today!

I purchased this coin because of it beauty and low mintage. The artwork on both the obverse and reverse is well detailed. I would have preferred less mirroring, but the coin is very attractive none the less.

I love the design of this coin. It is really beautiful!