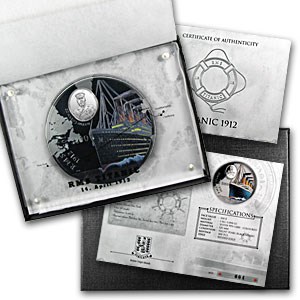 Limited issue of 300 worldwide!
This 1 kilo (32.15 troy ounces) .999-fine Silver coin from the British Virgin Islands was issued to commemorate the 100th anniversary of the sinking of RMS Titanic. After leaving Southampton on her maiden voyage to New York City, Titanic struck an iceberg about 2/3 of the way across the Atlantic and sank, causing the deaths of 1,514 passengers and crew.

The obverse of this coin has the usual likeness of Queen Elizabeth II. The reverse displays the Titanic colorized, at sea with a Silver inlaid oval of Captain Edward J. Smith with the ship's name, dates (1912-2012), and the coin's value below. The coin comes encased in acryrlic with a map showing the route of Titanic on that fateful night. Comes with a box of issue and certificate of authenticity from the Pobjoy Mint.