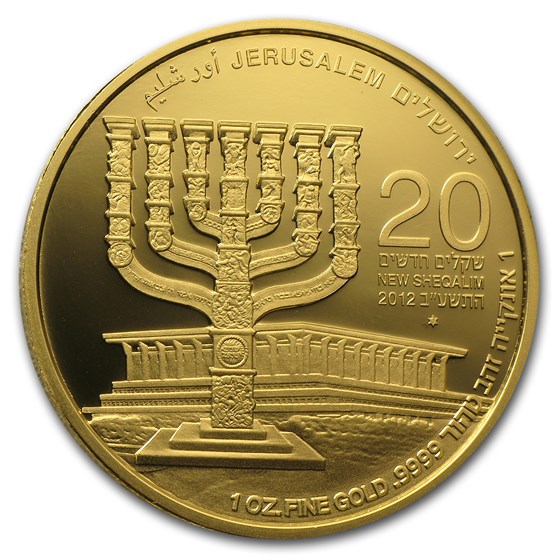 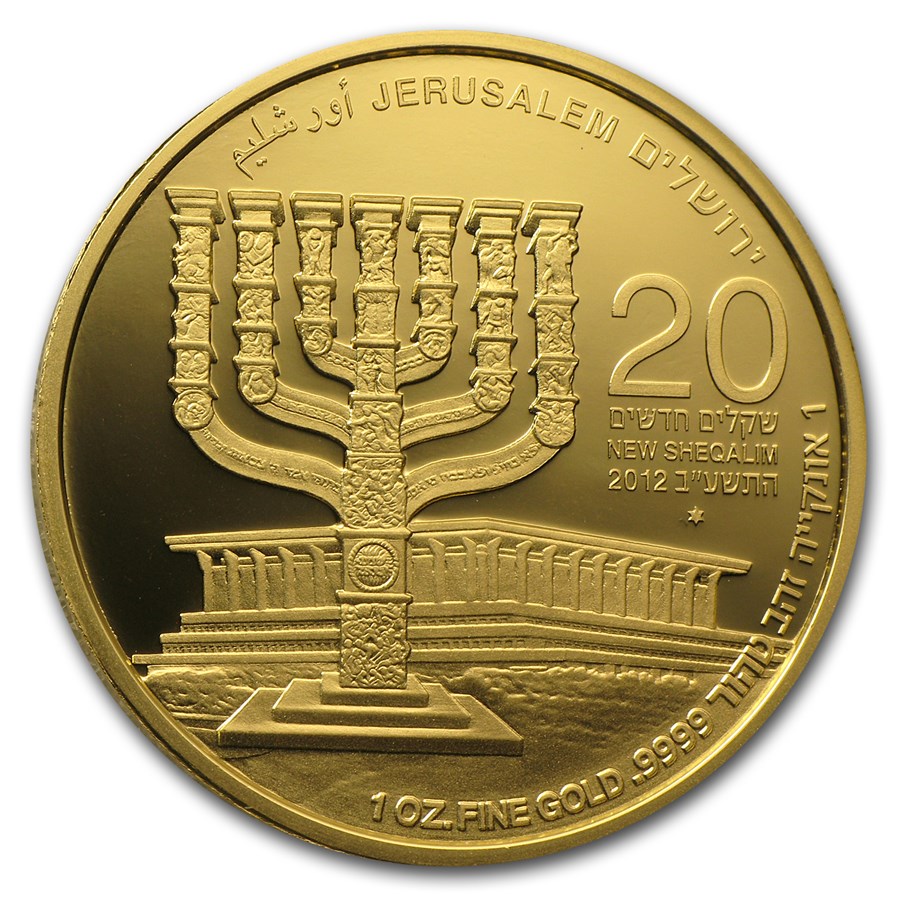 Your purchase is guaranteed to match the quality of the product shown. It will not be this exact item.
Product Details
Product Details
This fine Gold bullion coin from the Holy Land Mint is part of their "Jerusalem of Gold" series and depicts a very detailed Menorah. The series has been very popular among collectors worldwide.

The Coin:
This 1 oz coin, struck in .9999 fine Gold, is crafted by The Holy Land Mint and has a face value of 20 New Sheqalim. The obverse illustrates the Menorah, a candelabra with seven branches that was used in the ancient Holy Temple in Jerusalem. Intricately designed of .9999 pure Gold, this has been a very popular coin in this renowned series. The reverse depicts the famous Roaring Lion, which appeared on a 2,800-year-old ancient seal discovered in archeological excavations at Tel Megiddo in the Jordan Valley in 1904. Soon after its discovery, this seal mysteriously disappeared in Constantinople. The lion is the symbol of the tribe of Judah and of Jerusalem. This legal tender coin issued by the Bank of Israel comes in a handsome display box with certificate of authenticity. Own a piece of history and help relive the past, preserve the present, and ensure the future!

Holy Land Mint:
The Holy Land Mint - Israel Coins & Medals Corp. (ICMC) was established in 1961 and perpetually pursues their stated objective of “commemorating significant historic, national, social, scientific, and cultural achievements of the State of Israel” by specializing in commissioning, designing, minting and distributing unique Gold and Silver coins which reflect the unique character of Israel’s past, present and hoped-for future. They are the exclusive distributor on behalf of the Bank of Israel of all commemorative coins, and many of their remarkable coins are only offered in limited editions. Each of their products holds a uniquely historic legacy that is complimented by their renowned reputation for the highest quality coins and rounds.

Learn more about Gold value and see the latest Gold price online at APMEX.com. Have questions about how to buy Gold coins, bars or rounds, or about Gold investments? Speak with an Account Manager toll-free or click on the "Live Chat" button.

The beauty is breathtaking . Low mintage makes it a wise investment. I have several coins from that mint and am pleased with all of them.