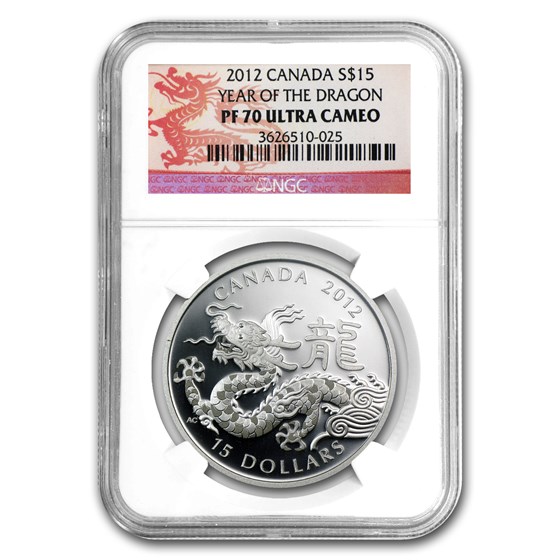 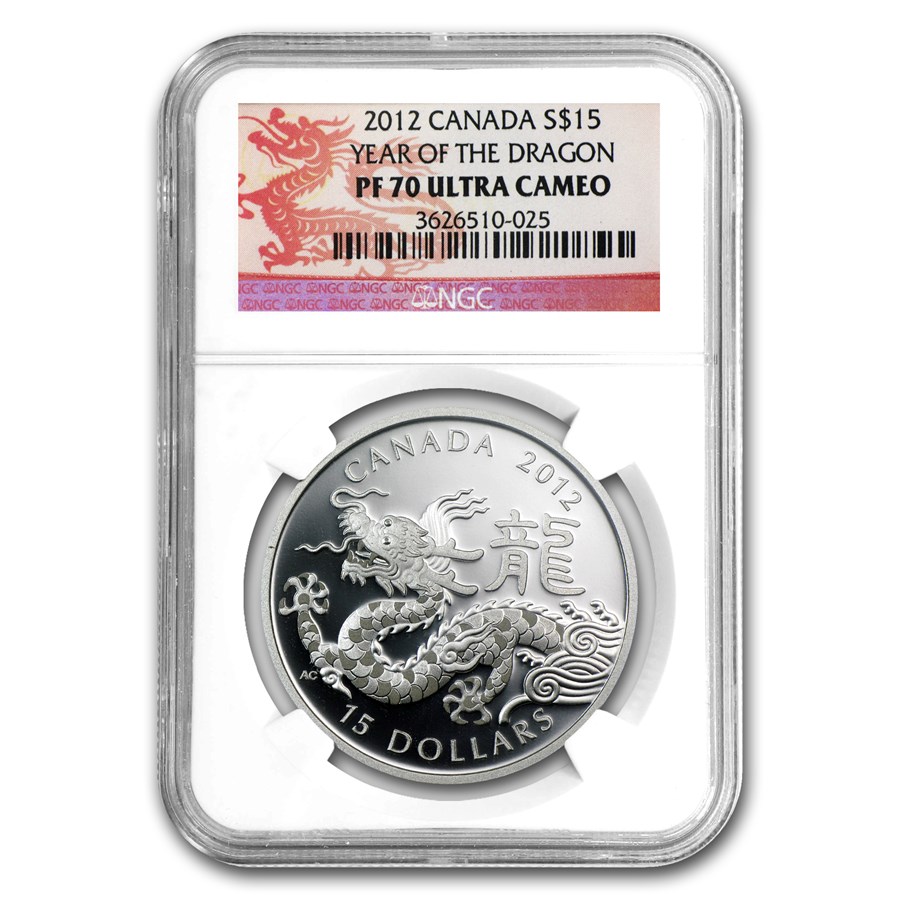 Graded a Perfect Proof 70 Ultra Cameo at NGC! Low Population! Mintage of only 48,888 coins!
This .9999-fine Silver coin from the Royal Canadian Mint features a Chinese Lunar Dragon with the date and denomination on the reverse. The obverse shows Susanna Blunt's design of Queen Elizabeth II of England. This highly collectible Silver coin contains 1oz of .9999 Fine Silver and is graded a Perfect Proof 70 Ultra Cameo by NGC.

The Chinese lunar calendar was first introduced by Emperor Huan Ti in 2637 BC. The calendar consists of a 12-year cycle, with each year featuring a different representative animal. There are legends about how the zodiacs were chosen. Some believe Lord Buddha summoned the animals to bid him farewell when he parted the Earth and rewarded his loyal subjects by naming a year after them - The Year of the Rat, Ox, Tiger, Rabbit, Dragon, Snake, Horse, Sheep, Monkey, Rooster, Dog and Pig. The character of each animal is believed to influence the events and political and economic conditions of its year, as well as the personality of individuals born during its cycle.

The year 2012 is ruled by the Dragon. The Dragon's personality is that of the ultimate "doer." It tackles everything with fiery enthusiasm. The Dragon is extremely loyal to its loved ones and will come to the rescue every time. Right or wrong, forget about steering a Dragon away from a disastrous situation - duty calls! The Dragon may have a big ego and demanding ways, but it inspires everyone it comes in contact with. This magical Character is too captivating to resist.

The year of the Dragon also ruled 1904, 1916, 1928, 1940, 1952, 1964, 1976, 1988, and 2000. However, people born in January or February should consult the Chinese lunar calendar. New Year does not automatically fall on January 1st. This celebration is better known as the Spring Festival and coincides with the first day of spring - a date that shifts from year to year depending upon the lunar cycle and solar year.