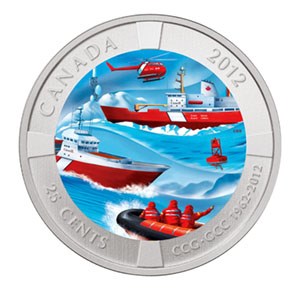 This cupronickel coin celebrates the 50th anniversary of the Canadian Coast Guard (CCG). In rich blue and white, rolling waters from the Arctic to the oceans, rivers, and other waterways of Canada span the coin’s central field. Across the sky at the top of the image, a search-and-rescue helicopter flies toward the coin’s right side. Below it, an icebreaker cuts toward the left-hand side of the coin through a frozen field of ice as the white ridges of a far north landscape rise behind it. A buoy floats placidly below the icebreaker, while another ship, moving at full speed tears rightward, approached by an inflated rescue boat bearing three red-jacketed rescue workers. Each vessel bears the red and white coloring of the Canadian Coast Guard. The image’s Silver frame is designed to give the impression of looking through a circular life-preserver and bears the embossed words “CANADA,” CCG-GCC 1962-2012,” the year “2012,” and the face value of “25 CENTS.” The obverse features the effigy of Her Majesty Queen Elizabeth II by Susanna Blunt. Coin is encapsulated and presented in a colorful folder which illustrates the story of the Coast Guard, protected by plastic sleeve.