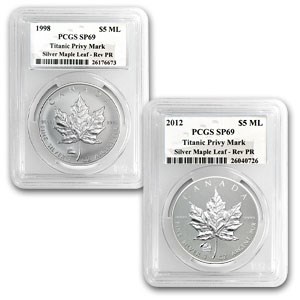 This is a two coin set of the popular 1998 and 2012 1 oz Silver Maple Leaf Titanic Privy Mark, each graded a near perfect Specimen 69 by PCGS! APMEX was your direct source for the 2012 Reverse Proof Privy Marked Silver Maple Leaf commemorating the 100th anniversary of the R.M.S. Titanic! APMEX had exclusive access to the entire mintage of just 25,000 coins directly from the Royal Canadian Mint! We also have exclusive access to this special Titanic label from PCGS, used on both coins for a matching set! These Silver Maple Leaf coins each feature a privy mark of their own replica version of the R.M.S. Titanic on the reverse in Reverse Proof design! The classic 1998 Titanic Privy Mark Silver Maple Leaf is ever popular and hard to find. The mintage of 26,000 coins were sold to a private distributor in 1998 and still prove to be scarce yet desirable. Here is your chance to get both coins together! Each with a different version of Queen Elizabeth's Effigy and Titanic Privy Mark. Grab your set while you have the chance! Both of these coins are hard to find. Especially together!