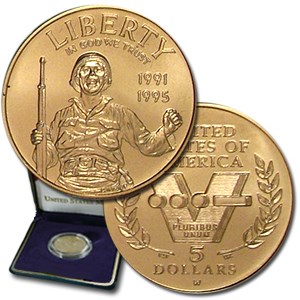 This $5 Gold coin was issued to mark the 50th anniversary of America’s involvement in World War II from 1941-1945. This Brilliant Uncirculated Gold coin comes with a box and certificate of authenticity!

The obverse depicts an American soldier with his rifle and arm raised in victory. The reverse features a “V” for victory, which is also shown in Morse code, both bordered by branches.