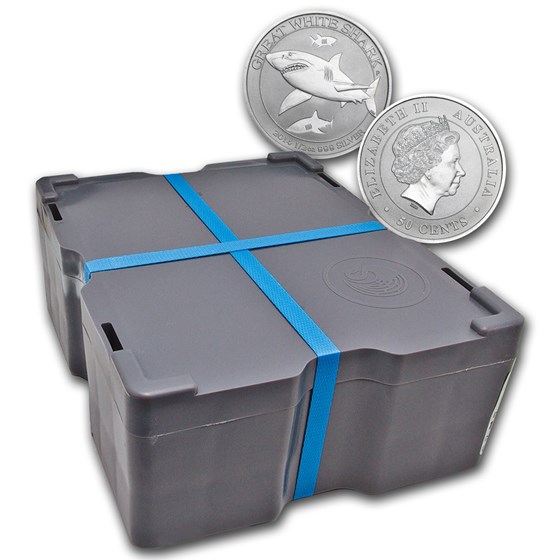 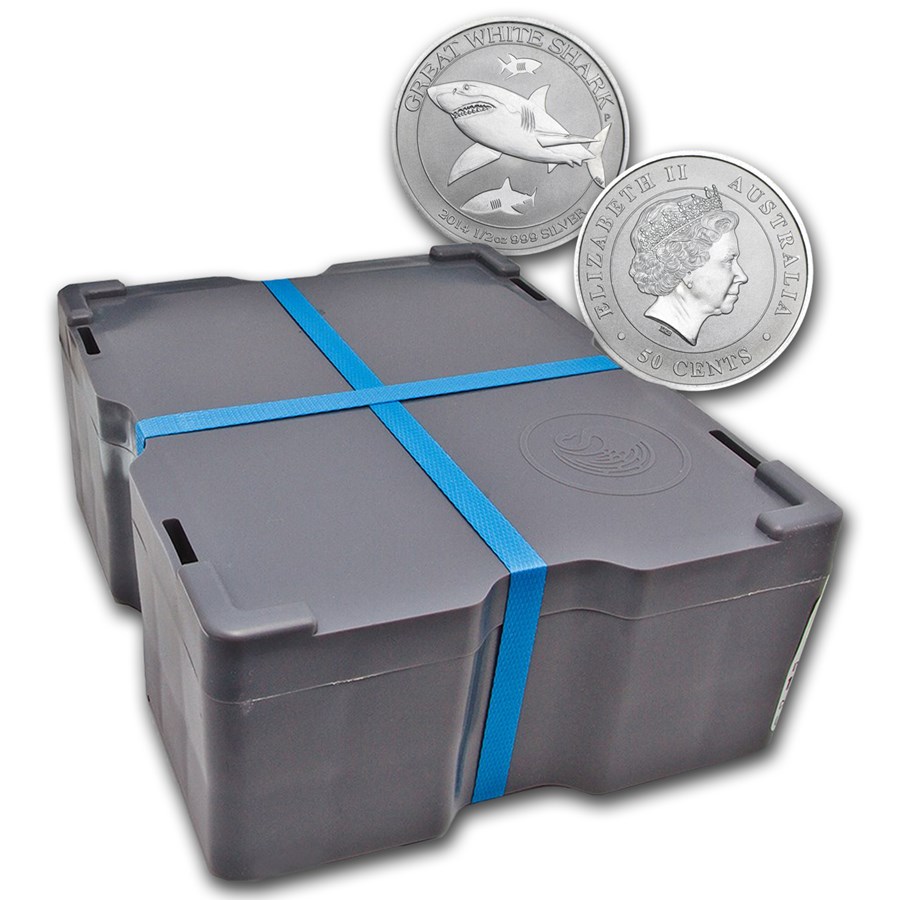 Coin Highlights: Handle your investment with care by adding these cotton gloves to your order today.

These coins are an attractive acquisition for both first-time Precious Metals buyers and long-term investors. Add this 500 coin Monster Box of the 2014 Great White Shark to your cart today!

The great white got its scientific name, Carcharodon carcharias, from the Greek words karcharos, meaning sharp, and odous, meaning tooth. The earliest known fossils are about 16 million years old. However, their evolutionary history is still in dispute between different sharks, including the mako shark and the prehistoric megalodon.

Great whites have an estimated lifespan of roughly 70 years. There are reports of a great white caught in Cuba in 1945 measuring 21 feet long and weighing more than 7,300 pounds! There have been claims of larger great whites, but many of these findings draw criticism for being unreliably measured. Like all other sharks, the great white has electroreceptors called Ampullae of Lorenzini, enabling them to detect electromagnetic changes caused by the movement of a living creature, or even a heartbeat if close enough!

The reverse of these 1/2 oz .999 fine Silver coins shows a ferocious great white shark, with the outlines of two other sharks in the background. The Ian Rank-Broadley likeness of Her Majesty Queen Elizabeth II and the monetary denomination of 50 cents (AUD) are shown on the obverse. Visit our blog to read an exclusive interview with the coin’s designer, Natasha Muhl.

We have received these Silver coins as an APMEXclusive® from The Perth Mint, which means you will be unable to get this beautiful design anywhere else. This exclusivity, combined with a strictly low mintage, adds an aspect of collectibility to these low premium Silver coins.

Bought this item as a long-term investment. It's went down slightly in purchase price since I bought it, though I expect the premium will go up over time. It gained a slight bump when the 2015 Hammerhead came out, and I anticipate it'll gain more premium when the 2016 edition comes out. I've kept the box sealed. It will take time for this investment to gain enough value to sell at a price I want, though that's why I bought it. It'll likely be a number of years. I would say "No, I would not recommend this to a friend" but only because I don't know anyone who would want to buy this much investment-only bullion and sit on it for that long. The product itself is good though, and I don't want to appear dissatisfied.

These are a value +++awesome looks..