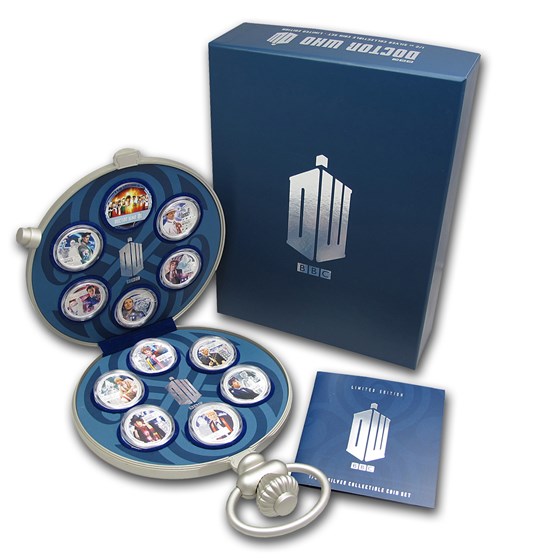 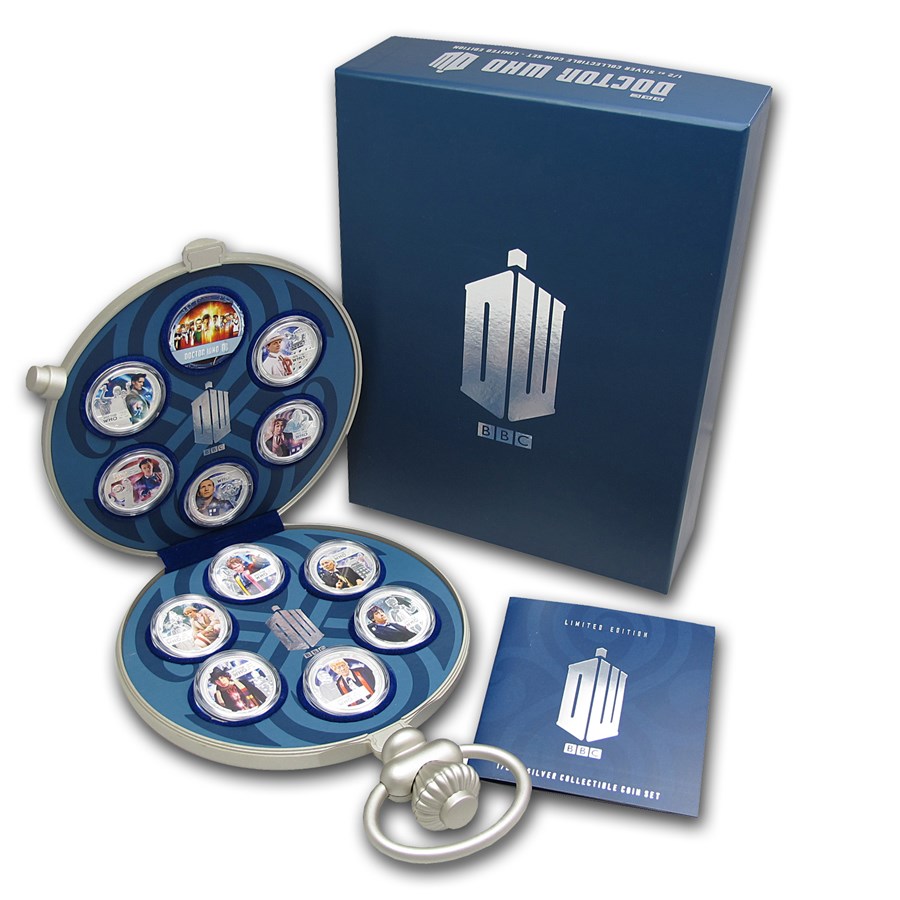 This Limited Edition Doctor Who 1/2 oz Silver Coin Set is presented in a quintessential, Silver-colored fob watch case. The case displays the entire 11 Doctor coin set, along with an open slot for the next doctor in the series, and comes with a Certificate of Authenticity. Doctor Who is currently the longest running and most successful science fiction television series of all time. Produced in Great Britain by the BBC, the program depicts the adventures of a time traveling alien known as the Doctor. He explores the universe in his TARDIS, a telepathic travel machine that’s bigger on the inside than the outside, and outwardly appears to be a blue 1960s British police box. Along with a succession of companions, the Doctor faces a variety of foes while working to save civilizations, help those with whom he came in contact with and right wrongs across the universe. Doctor Who first aired in November 1963, and to date the lead role has been played by eleven different actors. The program has received recognition from critics and the public as being one of the finest British television series ever produced and is aired around the globe.

The reverse depicts an engraved relief of the iconic TARDIS used by the Doctor to travel through time and space. This bursts forth out of a dynamic high quality color printed background representing time travel. The coins border features the finely engraved words Doctor Who 50th anniversary 1963 – 2013. Each coin features the Ian Rank-Broadley effigy of Her Majesty Queen Elizabeth II. The 50th anniversary coin is packaged in a special presentation case in the shape of the iconic TARDIS. The packaging has the distinctive sound effects of the TARDIS when opened, making it entirely unique. The doors of the TARDIS open to display the 1oz coin and Certificate of Authenticity.

The New Zealand Mint is a privately owned company in Auckland, New Zealand. It is the only privately owned mint in New Zealand, purchasing refined Gold from international sources to produce coins. They have established their reputation over the past four decades for their high quality design as exhibited by their innovative commemorative Gold and Silver bullion products. The only precious metal mint in New Zealand, the mint uses the tag-line “Minters of the South Pacific” and produces collector and bullion coins for a number of pacific nations, including Fiji, the Cook Islands, Niue and Tuvalu.

Being a Dr. Who fan from the Tom Baker era, I am happy to see my daughter growing to love the Dr. Who series even more than I did. She was thrilled beyond words to get such a well-made, well-thought out treasure from the Dr. Who world.