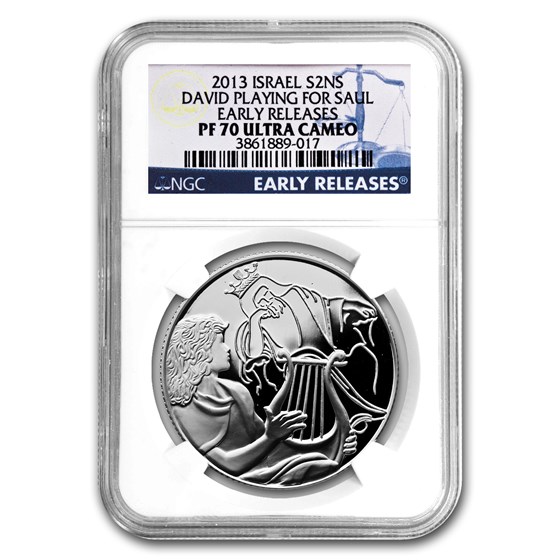 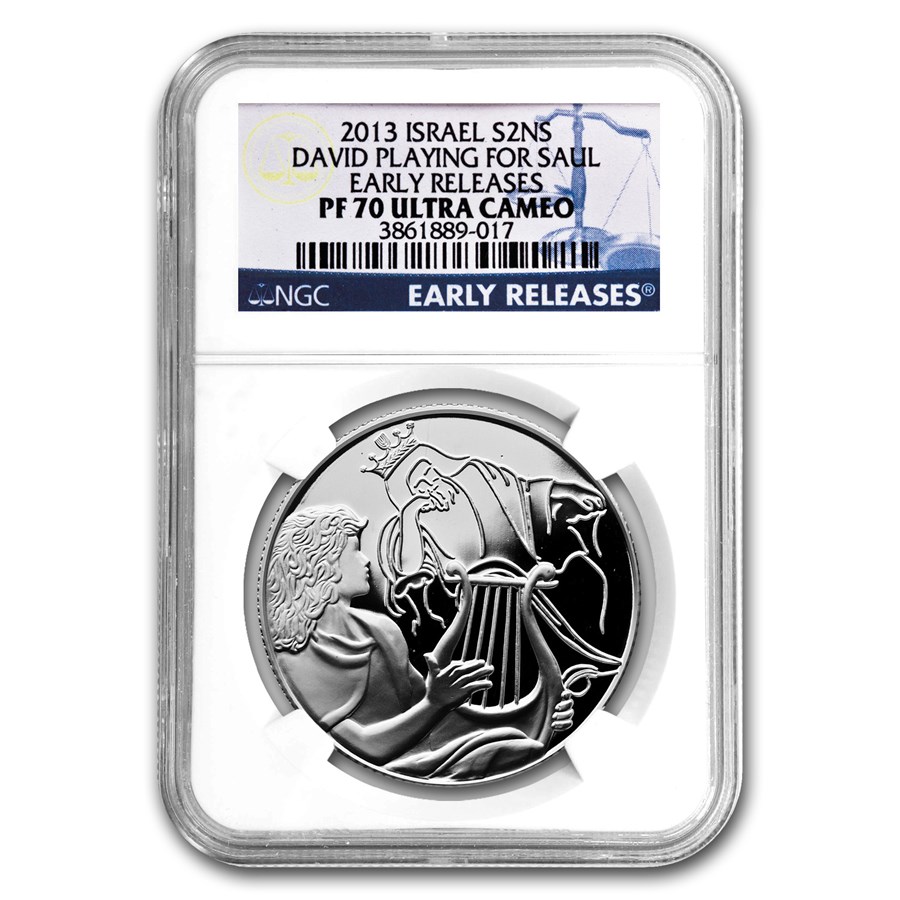 Your purchase will match the quality of the product shown.
Product Details
Product Details
The 18th coin of the Holy Land Mint's "Biblical Art Series" depicts David playing his harp for Saul on this intricately designed coin.


The Coin:
The reverse features a young David with his harp resting in his lap, its notes being played for the King. Saul is pictured passively listening to David, his interest waning as he tries to overcome sadness. The obverse shows the legal tender value of 2 New Sheqalim, along with arftul text around the borders that appears in several languages. A beautifully crafted coin made from .999 fine Silver, the excquisite attention to detail is unsurpassed and makes this piece a fantastic collectors item. This coin has been graded a perfect 70 ER (early release), and comes in a protective plastic case from NGC.

The Story:
The story states that King Saul had grown very unhappy and gloomy as he distanced himself from God. The servants noticed that this feeling escaped Saul when he was around music, thus he declared: "Find some one who can play well, and bring him to me. Let me listen to music; for it drives away my sadness."
One of the young men said: "I have seen a young man, a son of Jesse in Bethlehem, who can play well." Then Saul sent a message to Jesse, David’s father. He said: "Send me your son David, who is with the sheep. Let him come and play before me."
Then David came to Saul. When Saul saw him, he loved him, as did everybody who saw the young David. David played on the harp and sang before Saul and his music cheered Saul’s heart, and driving away his sad feelings. Saul liked David so well that he made him his armor-bearer; and David carried the shield and spear and sword for Saul when the king was before his army.

Holy Land Mint:
The Holy Land Mint - Israel Coins & Medals Corp.(ICMC) was established in 1961 and perpetually pursues their stated objective of “commemorating significant historic, national, social, scientific, and cultural achievements of the State of Israel” by specializing in commissioning, designing, minting and distributing unique Gold and Silver coins which reflect the unique character of Israel’s past, present and hoped-for future. They are the exclusive distributor on behalf of the Bank of Israel of all commemorative coins, and many of their remarkable coins are only offered in limited editions. Each of their products holds a uniquely historic legacy that is complimented by their renowned reputation for the highest quality coins and rounds.