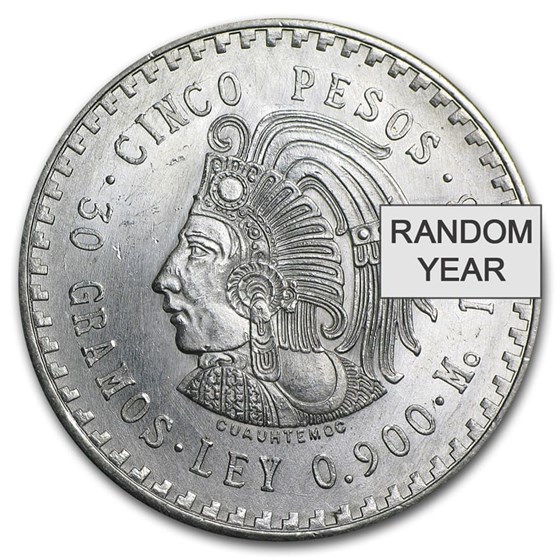 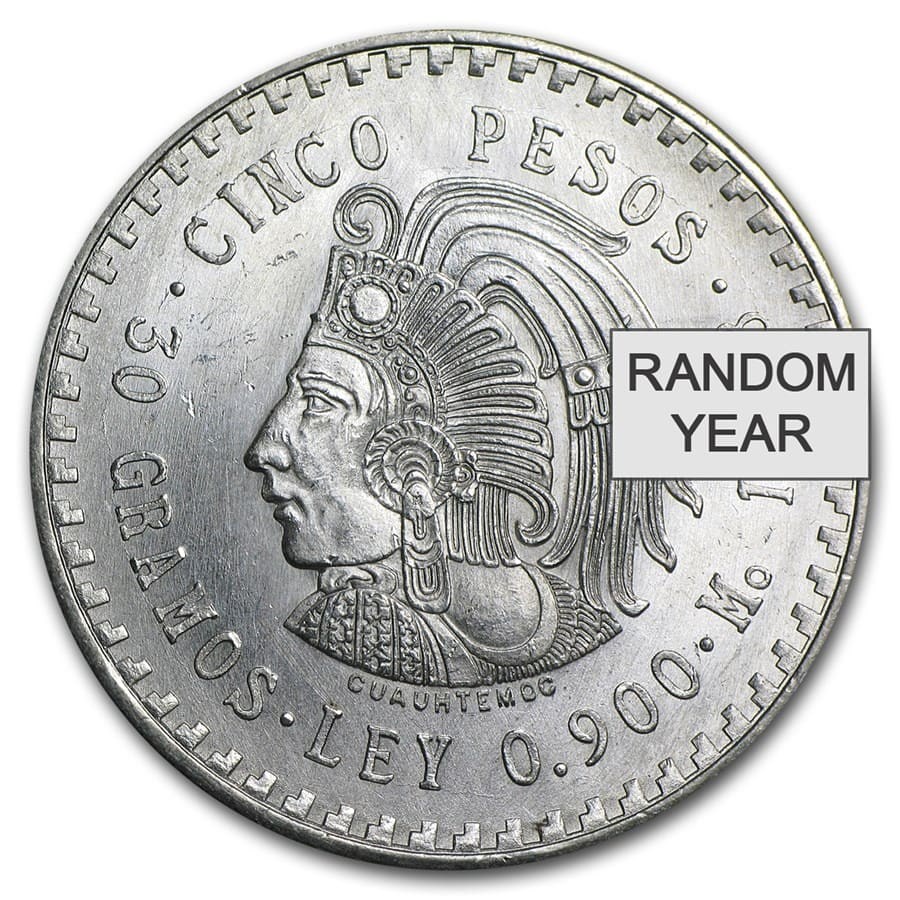 Product Details
Product Details
One of the most popular vintage Mexican coin designs, this 2-year-type coin features a stylized depiction of the last Aztec emperor, giving a distinctly Mesoamerican appearance to this crown-sized Silver coin.

Very impressed with this Silver Coin beautiful design .. is as described XF-AU thanks APMEX!!!

Just ordered my 4 one. I hope to get a 47 this time so I'll have atleast one. My favorite coin and I'd love to have both years. So beautiful and hefty!

This is my first foreign currency. Such detail went into making this coin. From the feathers on the golden eagle to the scales on the snake clutched in it's talons. Coin is in great condition, certainly xf-au. I've read many times about the "big Mexican silver", and I will surely be buying more in the future.

This is very nice piece of numismatic history from Mexico. A nice silver alternative to the common "Libertad". Considering buying more of these.

Very cool, thank you, APMEX, for selling these!

I bought some Libertad’s recently and threw one of these coins in the cart and the one i received was a 1948 and looked BU.....thank you apmex, i will be buying more!

Bought this coin on sale. Beautiful detail and design. Transaction with APMEX was easy.

** the 1947-1948 Mexico Silver Cinco Pesos Cuauhtemocs XF-AU (ASW .8681 oz) is the coin to which the following article refers and from which the sixty-two (62) Texas Ranger Badges were made in 1962.** October, 1962: TEXAS RANGERS NOW WEAR NEW BADGES OF MEXICAN SILVER The following article was released by the Texas Department of Public Safety in 1962 when the Texas Rangers were issued their current silver badges. Colonel Homer Garrison, Jr., Director of the Texas Department of Public Safety and Chief of the Texas Rangers, announced in October, 1962, that the Texas Rangers are going back to the tradition steeped Mexican silver badge worn by their predecessors during frontier days. Garrison said the new official Ranger badge, issued to each of the 62 members of the Force, is a replica of the historic original badge which old-time Rangers carved out of a Mexican five peso silver dollar when Texas became a State and their duties changed from military to law enforcement. The best information available indicates that the five-pointed star on the badge symbolized the "Lone Star" of Texas. The points are supported by an engraved wheel, which is termed the "wagon-wheel" badge. Each badge is made from a Mexican five Peso silver coin. The oak leaves on the left side represent strength and the olive branch on the right signifies peace. These are taken from the Texas Great Seal. The cutout center star has engraving on it and the center of the star is reserved for the Company designation or the rank of Sergeant or Captain or Senior Captain. The edges still often have the coin lines and the coin is still highly visible on the reverse of the badge. The five point "Lone Star" with a "wheel" around it is common in Ranger and other Texas badges from the late 1800's. ** the 1947-1948 Mexico Silver Cinco Pesos Cuauhtemocs XF-AU (ASW .8681 oz) is the coin from which the above badges were made**

I bought this coin simply in memory of my beloved grandfather (deceased). He encouraged me to travel while still young and I took his message to heart. He brought me back this coin as a souvenir from Acapulco in the 1970s. I wanted a backup. Now I have it. And aesthetically it is a work of art. +++ Beautiful - The feathers on the eagle and the scales on the snake are beautiful. The headdress and facial features are fantastic. - Low mintage - According to Numista the mintage is 26,740,000, more than 5X the 1947 issue. I didn't buy it as a collector, so this factor is irrelevant for me. - Condition - The text is so fine (a problem with many Mexican coins in my limited experience) that it is difficult to tell if it is 1943 or 1948. As it was issued only two consecutive years, the truth of the matter is obvious. As there is an imperfection that makes 'cinco' cingo', I would say it is XF. Its imperfections (like my grampa's) provide unique character.

I've been buying new silver, mostly for long term investment. I'm not a collector. These came up on sale. I liked the design despite the price over spot, so I bought 4 on a whim. Wow! I had low expectations but these made me smile. One with a nice antique patina, but still sharp. Two that are exactly as stated, XF-AU, with one leaning toward BU. The last one had brilliant bronze and blue toning. Gorgeous coin. I originaly thought one would end up in my pocket for a charm before they arrived. They're too nice. I'm very happy.