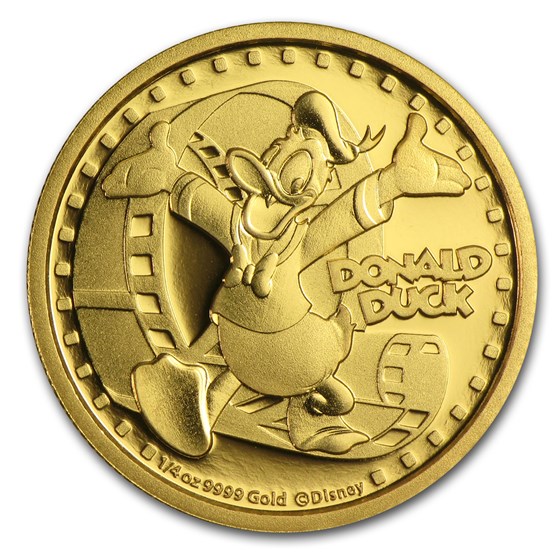 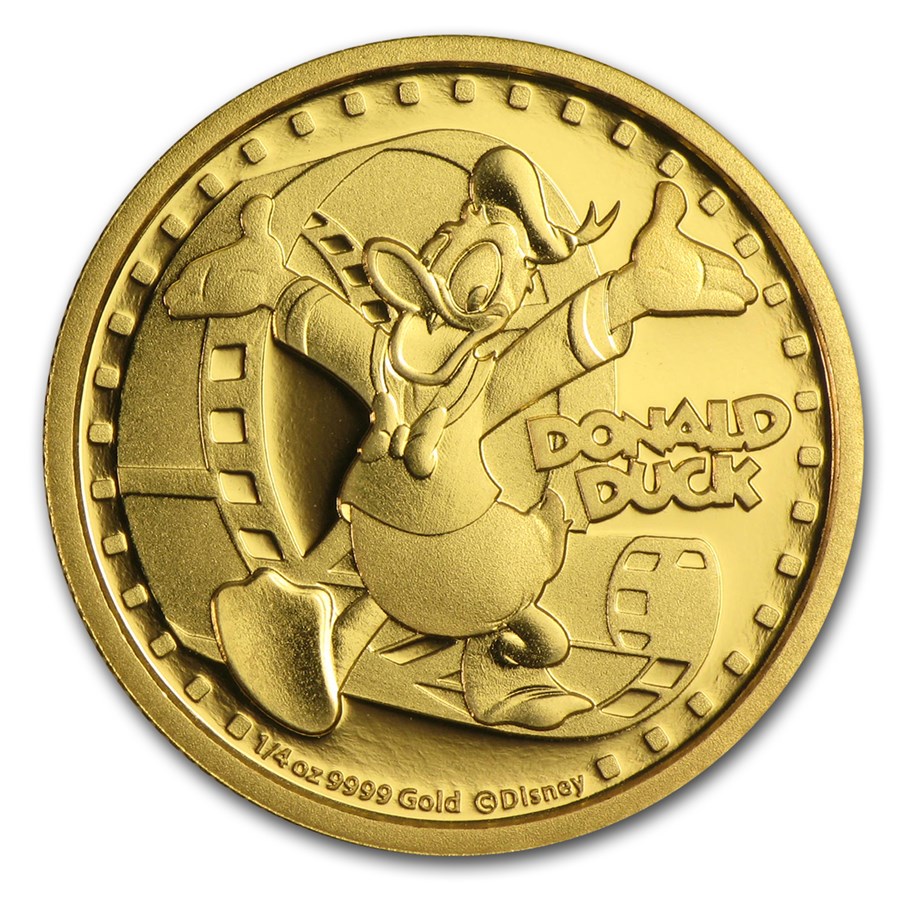 Coin Highlights:
This ideal gift for Donald Duck and Disney buffs has a limited mintage of only 1,000 coins. This highly anticipated coin is a must have for any Disney enthusiast. Add this 2014 Niue Proof Gold 1/4 oz Donald Duck coin to your cart today!

The Coin:
The obverse features the Ian Rank-Broadley effigy of Her Majesty Queen Elizabeth II, with her name and the legal tender value of Niue 25 DOLLARS along the edge. The reverse is a still frame of the iconic Donald Duck as he appeared in later films, his blue suit and hat matched by his gleeful smile.

A strip of film floats in the background, appropriately framing the cartoon character that appeared in more films than any other Disney character of all time. The coin is presented in a Perspex case allowing 360 degree presentation, and a Certificate of Authenticity is displayed on top of the case.

The Story:
Donald Fauntleroy Duck is the most prolific of all the Disney characters in terms of his number of appearances, total screen time, and comic book career. An anthropomorphic white duck, Donald wears a sailor suit with a bow tie, and is known for his short temper.

He is a loveable show-off, however, Donald’s love of bragging often takes him over his head, usually to hilarious effect. ‘Who? Me? Oh, no, I’ve got a bellyache’, are eight words from The Wise Little Hen (1934) that introduced one of the most popular Disney cartoon characters.

Donald’s distinctive voice was created by Clarence Nash, who performed the role for 50 years. In 2004, Donald was recognized with a star on the Hollywood Walk of Fame.

New Zealand Mint:
The New Zealand Mint is a privately owned company in Auckland, New Zealand. It is the only privately owned mint in New Zealand, purchasing refined Gold from international sources to produce coins. They have established their reputation over the past four decades for their high quality design as exhibited by their innovative commemorative Gold and Silver bullion products.

The only precious metal mint in New Zealand, the mint uses the tag-line “Minters of the South Pacific” and produces collector and bullion coins for a number of pacific nations, including Fiji, the Cook Islands, Niue and Tuvalu.