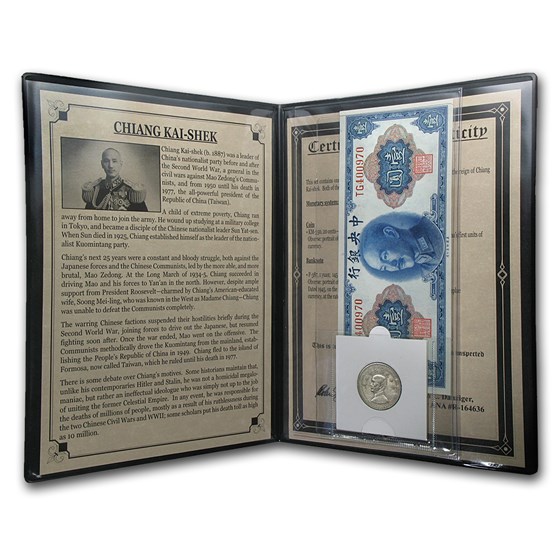 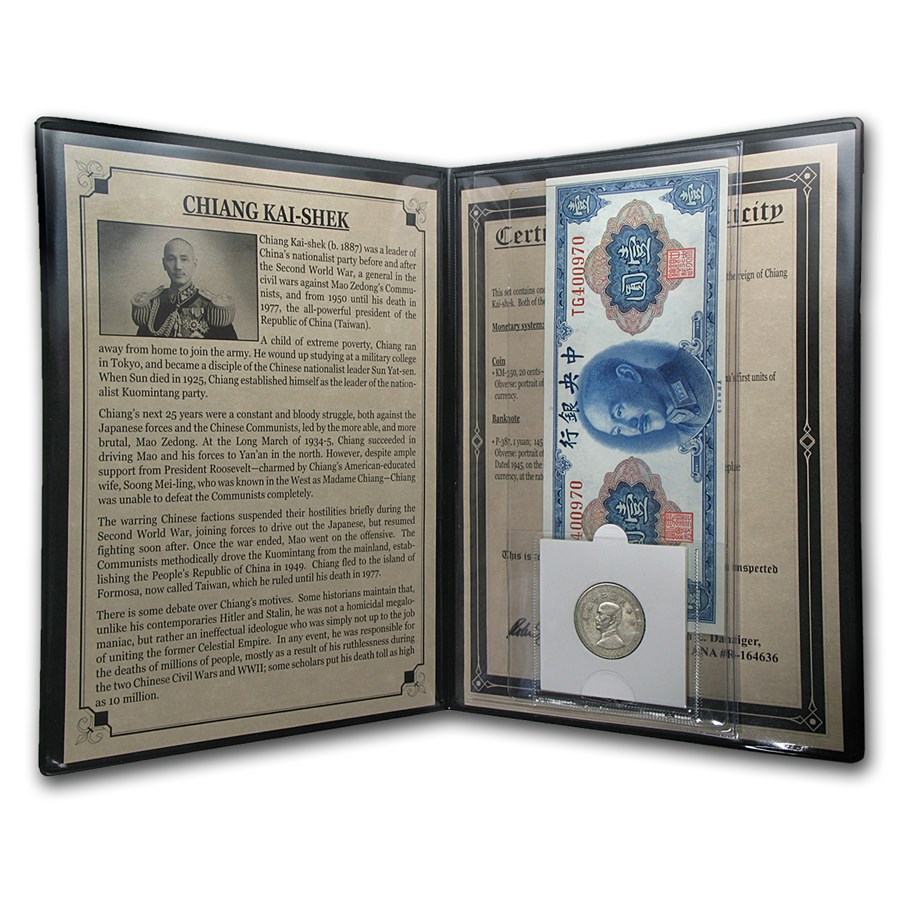 Product Details
Product Details
This set contains one coin and one banknote issued in the Republic of China during the time of Chiang Kai-shek's Presidency.

Chiang Kai-shek (b. 1887) was a leader of China’s nationalist party before and after the Second World War, a general in the civil wars against Mao Zedong’s Communists, and from 1950 until his death in 1975, the all-powerful president of the Republic of China (Taiwan.)

A child of extreme poverty, Chiang ran away from home to join the army. He wound up studying at a military college in Tokyo, and became a disciple of the Chinese nationalist leader Sun Yat-sen. When Sun died in 1925, Chiang established himself as the leader of the nationalist Kuomintang party.

Chiang’s next 25 years were a constant and bloody struggle, both against the Japanese forces and the Chinese Communists, led by the more able, and more brutal, Mao Zedong. At the Long March of 1934-5, Chiang succeeded in driving Mao and his forces to Yan’an in the north. However, despite ample support from President Roosevelt, charmed by Chiang’s American educated wife, Soong Mei-ling, who was known in the West as Madame Chiang, Chiang was unable to defeat the Communists completely.

The warring Chinese factions suspended their hostilities briefly during the Second World War, joining forces to drive out the Japanese, but resumed fighting soon after. Once the war ended, Mao went on the offensive. The Communists methodically drove the Kuomintang from the mainland, establishing the People’s Republic of China in 1949. Chiang fled to the island of Formosa, now called Taiwan, which he ruled until his death in 1975.

There is some debate over Chiang’s motives. Some historians maintain that, unlike his contemporaries Hitler and Stalin, he was not a homicidal megalomaniac, but rather an ineffectual ideologue whom was simply not up to the job of uniting the former Celestial Empire. In any event, he was responsible for the deaths of millions of people, mostly as a result of his ruthlessness during the two Chinese Civil Wars and WWII; some scholars put his death toll as high as 10 million.

what an exceptional way to learn history. As always, Apmex has put together an interesting item at a very reasonable price.