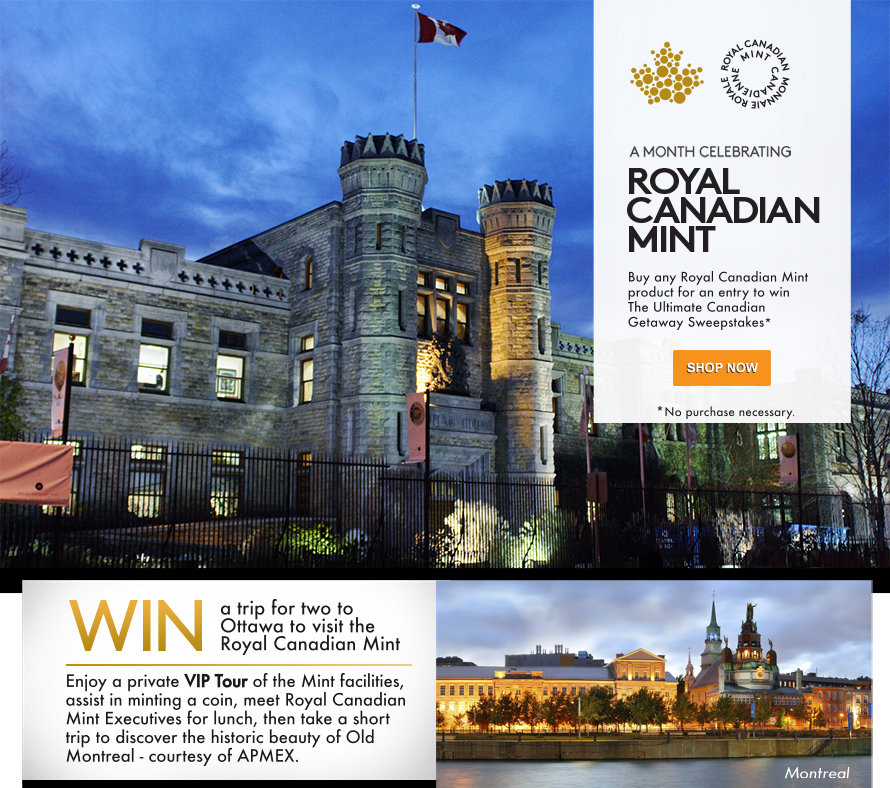 1. In the Ultimate Canadian Getaway Sweepstakes (“the Contest”), APMEX will award one individual two roundtrip coach class tickets to Ottawa, Canada, departing from the closest major airport to the winner’s physical address, two nights’ accommodations at an Ottawa hotel, lunch with a Royal Canadian Mint executive, photo holding a 400 oz Gold bar, minting of a production coin, a private VIP tour of the world-renowned Royal Canadian Mint, travel by train and two nights’ accommodations in Montreal and tickets for two to the Montreal Museum of Fine Art and the Botanical Gardens of Montreal (the “Prize”).

Travel will be in coach class on a major airline carrier of APMEX’s choice, departing from a U.S. airport of the winner’s choosing, destined for Ottawa, Canada and returning to the same airport as the departure.

Air travel arrangements are subject to the following conditions:

2. Except as provided in Rules 9 and 10, the Contest is open to all persons who are 21 years of age or older and are legal residents of the United States.

3. How To Enter:
No purchase is required to participate in the Contest.

Beginning MARCH 4, 2015, when a person purchases any Royal Canadian Mint product through www.APMEX.com, or orders these products from APMEX by telephone, he or she will automatically be entered in the Contest. Purchases made on eBay do not qualify for entry into this contest.

However, no purchase is required to enter, so in lieu of purchasing Royal Canadian Mint products, you may send us a 3”x 5” note card on which you have printed your name, mailing address, phone number and a valid email address. This should be sent to the following address and must be received no later than APRIL 6, 2015. One mail-in entry per household. All entrant-provided email addresses may be collected by APMEX for promotional use. Send your entry to:

APMEX shall not be responsible for incomplete, lost, late, damaged, illegible or misdirected entries. The prize will be selected at random from all eligible entries.

4. The winner will be selected the week of APRIL 6, 2015, from among all eligible entries received. The winner will be notified by first class mail, telephone or electronic mail at the discretion of APMEX no later than APRIL 13, 2015. Return of any Prize/Prize notification as undeliverable will result in disqualification of that winner and the selection of another winner by APMEX.

The winner and the winner’s guest shall complete, execute and return to APMEX such other documentation as may be reasonably requested by APMEX to evidence further their agreement with these Rules.

8. The Prize consists of two (2) roundtrip coach class tickets to Ottawa, Canada, departing from the closest major airport to the winner’s physical address, two nights’ accommodations at an Ottawa hotel, lunch with a Royal Canadian Mint executive, photo holding a 400 oz Gold bar, minting of a production coin, a private VIP tour of the world-renowned Royal Canadian Mint, travel to and two nights’ accommodations in Montreal and tickets for two to the Montreal Museum of Fine Art and the Botanical Gardens of Montreal. Each trip for two persons is valued at $3,500.00 US. Each Prize consists of only those items specifically listed as part of the prize and specifically excludes anything else. Air carrier's regulations and conditions apply. Travel on tickets must be completed by NOVEMBER 15, 2015. Reservations are subject to availability, and certain restrictions apply.

9. The Contest is open to all individuals age 21 years or older at the time of entry. Employees of APMEX, the Royal Canadian Mint, their subsidiaries, advertising and promotion agencies or partners and their immediate family members (spouse, parents, siblings, and children) and/or those living in the same household of each are not eligible. If it is found that a person who does not meet the eligibility criteria set forth in these rules has submitted an entry, that entry will be deemed ineligible and the person will not be eligible to receive the Prize.

10. The Contest is not open to residents residing outside the United States. The Contest is subject to all federal, state and local laws and is void where prohibited by law, restricted or taxed.

11. APMEX reserves the right to disqualify any entries for any error in the transmission of online entries.

12. No substitution or transfer of the Prize is permitted, except that APMEX reserves the right to substitute a prize of equal or lesser value in the event that the Prize is unavailable.

13. Acceptance of a Prize constitutes permission to APMEX and its agencies to use a winner's first name and/or likeness for any promotional, advertising, or Internet usage for an indefinite period without further compensation unless prohibited by law. All materials are the sole property of APMEX and will not be returned.

14. By accepting a Prize, the winner and the winner’s guest agree to defend, indemnify, and hold harmless APMEX, and their respective directors, officers, agents, employees, affiliates and assigns, from and against any and all claims, loss, expense, damage, and/or liability, including, without limitation, reasonable attorneys’ fees, arising from, or in connection with, the Contest and the use or non-use of the Prize. The winner and the winner’s guest assume all liability for any injury, loss or damage caused or claimed to be caused by participation in the Ultimate Canadian Getaway Sweepstakes or use of the Prize.

15. Travel accommodations (roundtrip air travel from the United States and train travel from Ottawa to Montreal) on board the carriers of APMEX’s choice will be governed by the terms and conditions of the above mentioned airline and train service providers.

17. By participating in the Ultimate Canadian Getaway Sweepstakes, entrants agree to be bound by these Official Rules and any interpretation or application thereof by APMEX.

18. APMEX reserves the right to change the Contest Official Rules or terminate the Contest without notice. If, for any reason, the Contest is not capable of running as planned (including, but not limited to, infection by computer virus, bugs, tampering or unauthorized intervention, fraud, technical failure or any other causes which corrupt or affect the administration, security, fairness, integrity or proper conduct of this Contest), APMEX reserves the right at their individual sole discretion to cancel, terminate, modify or suspend the Contest.

19. APMEX shall not be responsible for any typographical or other error in the printing of the offer, administration of the Contest or in the announcement of the Prize.

20. A winners list will be available by sending a request to: APMEX – Ultimate Canadian Getaway Sweepstakes Winners List, 226 Dean A. McGee, Oklahoma City, Oklahoma, 73102. All requests for the winners list must be received by MAY 1, 2015.