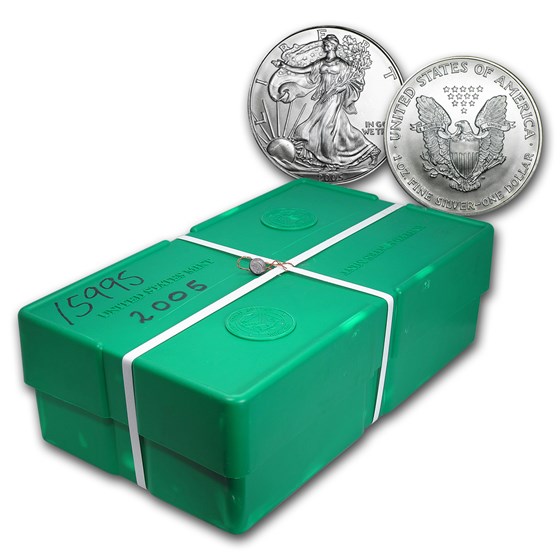 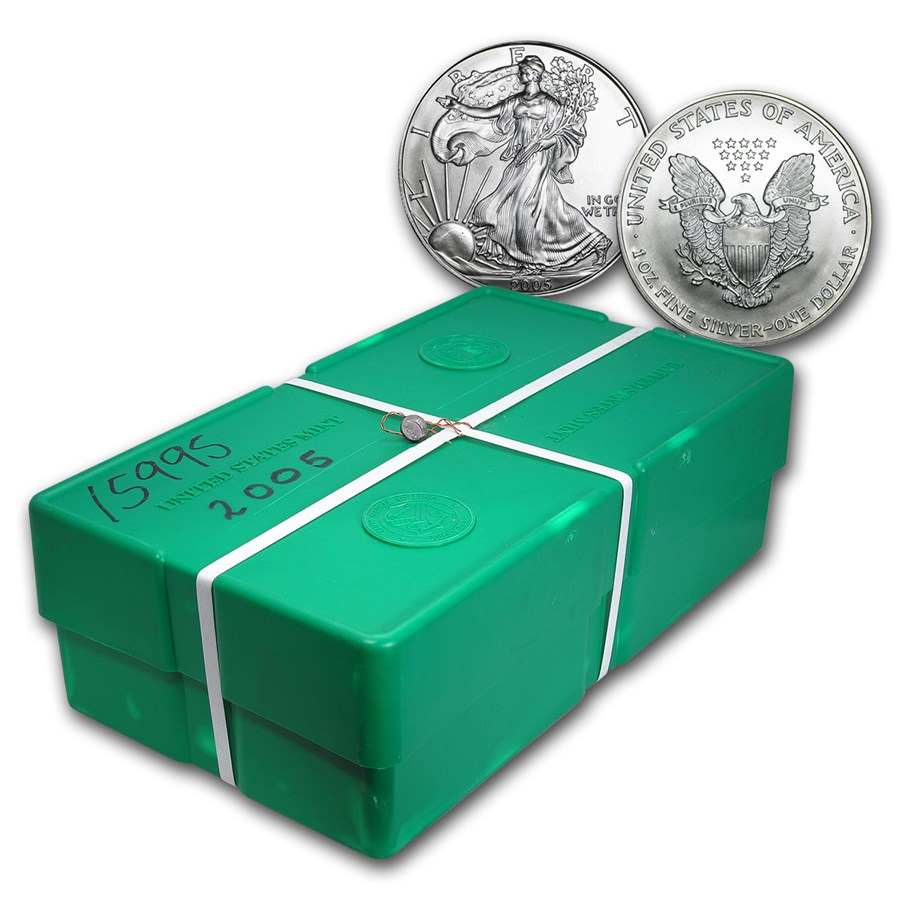 Product Details
Product Details
Unopened Mint-sealed green monster box comes with 500 1 oz American Silver Eagles which is one of the most prolific and successful bullion programs in the world.

Protect your American Silver Eagles by adding a pack of these cotton gloves or dehumidifier crystals to your order.

Back dated and unopened boxes of American Silver Eagles have become increasingly difficult to come by, making this a great opportunity secure and preserve your investment while adding a large amount of Silver in a single purchase. Add this 2005 Silver Eagle Monster Box to your cart today!

APMEX has not verified the contents of these mint-sealed boxes.


The American Silver Eagle Coin Series
The Silver American Eagle is one of the most prolific and successful bullion programs produced by the United States Mint. Silver American Eagles are widely popular and highly collected coins today but their significance is rooted in more than just the sales. There is historical significance to this coin and it starts with the obverse of the Silver Eagle, designed by Adolph A. Weinman.

The American Silver Eagle Coin Series Design
This design, introduced in 1986, was not the first time used in circulation. Weinman's Walking Liberty design was introduced during a time in which American coinage beauty was lacking. The Walking Liberty Half Dollar was minted between 1916 and 1947. The design was an instant hit with the public as a reminder of American ideals, opportunity and patriotism. The American Eagle coin's obverse design is Adolph A. Weinman's full-length figure of Liberty in full stride, enveloped in folds of the flag, with her right hand extended and branches of laurel and oak in her left. To understand the importance of the American Eagle coins is to understand the importance of its designer and design.

IRA-Approved Silver Eagles
In the midst of the various social, political, and financial factors that continuously impact today's global economy, Silver holdings in an IRA can provide some financial reassurance and stability. Many view Silver as a more secure option for investment opportunities than stocks, bonds, or other forms of investments backed by paper. An IRA backed by Silver gives you the opportunity to invest in a physical commodity with a strong historic record as a store of value. The Silver American Eagle is IRA-Approved and widely available at APMEX.