Kangaroo Gold Coins Through the Years

Kangaroo Gold coins were introduced in 1987 by Gold Corp., an entity entirely owned by the Western Australian Government. Issued as Australian legal tender, the Gold Kangaroo is a favorite item among collectors and investors worldwide. The obverse consistently bears a portrait of Queen Elizabeth II. However, the reverse has changed several times since the coin's release. At first, the reverse of these coins depicted an Australian Gold nugget. In 1989, the design changed and instead featured a more widely recognized symbol of Australia: the kangaroo. An iconic representation of fascinating wildlife, the kangaroo design brings this bullion coin series to life.

Choosing the Best Size Gold Coin for You

Coins from this series are issued by the Perth Mint in 1 oz, 1/2 oz, 1/4 oz, 1/10 oz and 1/20 oz sizes with face values in Australian dollars. In addition to these typical sizes, the Kangaroo Gold coins have also been released in larger sizes, including 2 oz, 10 oz and 1 kilo coins. By minting a variety of fractional sizes, collectors and investors can acquire coins from this series, even on a narrower budget. 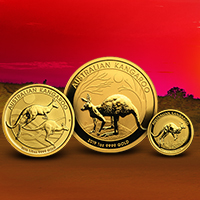 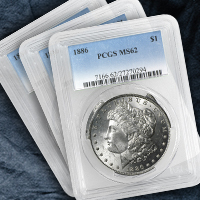 What are Graded Coins? 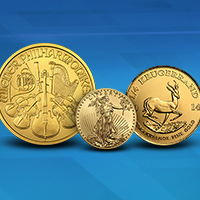 What Are Fractional Coin Sizes?